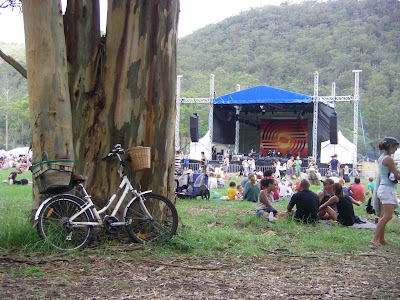 (Peats Ridge, Australia, a 'bicycle-helmet-law' land - though notwithstanding the legislation no helmets can be found here!!!)

Go, Clover!!!! - but yet again I'm curious to know where the ABC stands on the issue of utility cycling.

Brendan Trembath, the Radio National reporter for this particular "PM" segment 'reported' in all seriousness that:

...but truly, ABC, were these really your sentiments? Your report verged on ridiculous as you comforted the 'outraged motorist' who called you on her mobile phone whilst she was driving home through Sydney's streets:

BT: So you think it was pre-determined? They were going to put this cycleway through no matter what?

'Outraged Motorist': No matter what. They were just going through the motions and covering themselves basically.

We're talking about putting in a cycleway here! - not a freeway or a motorway!...a cycleway!

What a scandal! How dare they!