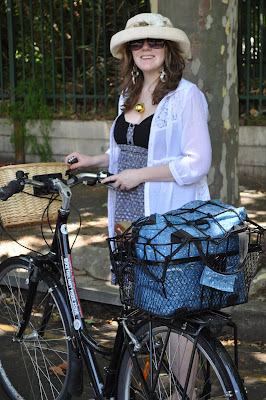 As an 'activist' I really don't expect to have my letters published in the Sydney Morning Herald anymore, namely because I have been 'reliably informed' that they don't print campaigners (they print politicians though - how does that work??!!)

Notwithstanding that's the truly great bit about having a blog - you can publish yourself!!! So the letter below is 'pure-smh-unpublished-me' in reply to yesterday's article:

The fierce academic debate that continues to rage over bicycle helmet laws (‘Authors admit errors in study on bike helmets and head injuries’, 30/12/2010) only serves to highlight the flawed and contradictory nature of this highly questionable legislation.

Prima facie, the evidence pertaining to helmets is conflicting.

Given that most other countries across the globe openly acknowledge mandatory helmet laws raise issues of civil liberties and consequently leave the decision ‘to helmet or not’ to their individual citizens, it is ridiculous that we are still legally compelled to wear one in Australia.

Moreover the ‘bicycle-helmet-I-did-not-wear’ which resulted in a criminal conviction for me in September 2009, will be illegal to sell from next year anyway - now deemed unsafe which is what I argued in the first place.

It is time that Regulation 256 of the NSW Road Rules 2008 was revoked. Unquestionably the ‘helmet decision’ should be relinquished to the realm of choice.

Predictably though, the SMH published today an affirming rant (see John Roache's letter) to bolster the omnipresent, ignorant and uninformed 'smoke & mirrors' argument that continues to prevail in the Australian community.

Putting 'laziness' aside and looking at the facts, how is it difficult to internalise that helmet laws are misleading, deceptive, unsubstantiated and the biggest 'safety-wash' ever? - sigh!

Anyway, here we are at the end of 2010 and whilst it would be easy to despair just a little at the glacial progress we seem to be making, we have raised the profile of helmets & laws & most importantly choice, and we have got everybody chatting - well done, us!!!!

So, what are my plans & resolutions for next year?...well, after much thought, I've pared it right down to this 'teensey-weeney-weeney' one...

"Exposing the 'safety-wash' of helmet laws once and for all by whatever means it takes" - and maybe, just maybe, the new provisions in the 'soon-to-be-renamed' Trade Practices Act might help - fingers crossed!!!! 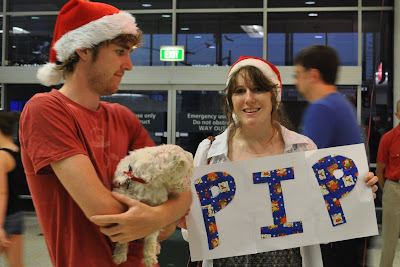 After an anxious 'airport-wait', baby no. 2 just 'snuck' in for the last few minutes of Christmas Day - Yay!!!!! 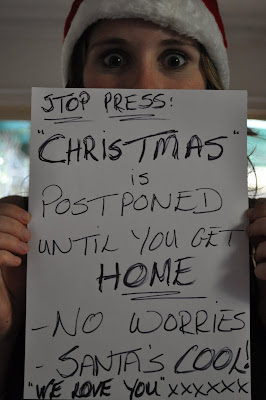 I have 'postponed' Christmas until our beautiful baby no. 2 is back in Australia with us! - there is no way Christmas can happen at Heathrow Airport - I won't let it!!!!

Why are mainstream media so wedded to bike helmet laws? 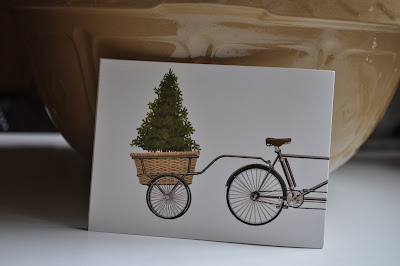 Something that has baffled me throughout my campaign to make bicycle helmets a matter for choice is the faith-based attitude our media have towards bicycle helmet laws and why they continue to barrack for them!

Can anyone explain to me why they take this position?

Why are they not intrigued by the continuous conflicting academic discussion (one that has lasted for 20 years no less)?

Why are they not concerned with the limited nature of actual helmet testing?

Why don't they investigate who actually funds the main bicycle advocacy groups and why these bodies are so silent on the issue of advocacy?

Why aren't they shouting from the roof-tops that it's ridiculous that we have these laws when the evidence remains contradictory, flawed and largely unenforceable?

Clearly there are notable exceptions like Mike Pritchard from ABC Rural Radio, Jo Jones from Bike-Love, & Matthew Moore from the Sydney Morning Herald who no doubt have personal views on the subject but are capable of putting them aside for genuine 'reporting' purposes. Notwithstanding these individuals, the general timbre of our media has not been one of 'reporting', but one of opinion & unquestioning faith.

Admittedly, it wasn't really a surprise to get the 'grilling' I received from the '7PM Project', and anyway, the live nature of the show offered me a chance to express my position whilst simultaneously protecting me from being misconstrued.

No, the big 'let-down' was Wendy Carlisle's report for 'Background Briefing' in September.

I have been a 'Background Briefing' tragic for years and I was so disappointed that my 'all-time-favourite-show' failed to deliver its usual balanced discussion on a particular topic. The premise that it had was disingenuous and shallow - any listener could spot the veil of pretense as it blatantly 'cheered-on' the promoters & supporters of helmet laws.

I have no problem with people choosing to wear a helmet, but I vehemently and actively object to being forced to partake in this risky behaviour and will continue to resist this emotional 'battery-of-me' at all costs.

To me, it is clearly evident that helmet spin is:

In fact all things considered, there's a fine line between 'mandatory standards' & 'recalls' & 'bans', so I cannot understand for the life of me why my government forces me to wear a 'questionable' helmet, that has already sustained a blow, albeit a testing one, so is therefore no longer capable of sustaining another one, so therefore ought to be replaced immediately, whenever I hop onto my bike... 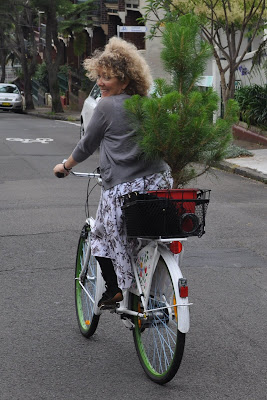 Funtimes getting our tree from Glebe yesterday, though you wouldn't believe how heavy this little pint-sized thing was!!!! - why, I ask myself, did I choose the one that had just been watered?

But all that aside, my pretty little cargo made people smile as I cycled from Glebe to Newtown - so much friendliness and goodwill - maybe I should cart an xmas tree around all the time?!

...now of course we need to decorate it - and I've got this little tiny hunch, it isn't going to take very long!!!!
Share |
Posted by Freedom Cyclist at 11:45 PM 6 comments 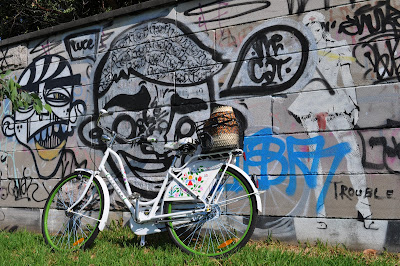 During this past week there has been some discussion concerning Associate Professor Chris Rissel’s study published in the August edition of the “Journal of Australasian College of Road Safety”.

Featuring on the Croakey Health Blog, Tim Churches' article and Chris Rissel's response have made for interesting reading - in fact one could say they lend further weight to our important campaign to revoke bicycle helmet laws.

To me the continuing academic debate on the matter only confirms how ridiculous it is that we are still legally compelled to wear a bicycle helmet in Australia.

Why is it that our nation struggles with this notion when most nation states across the globe openly acknowledge that mandatory helmet laws raise issues of civil liberties? Accordingly the decision ‘to helmet or not’ in those countries is left to their individual citizens. It is time this practice was adopted here, and relinquished to the realm of choice.

...and as a little addendum; who is 'Wade Wallace'? - poor darling needs a set of trainer wheels rather than a helmet!!!!

Furthermore, after watching the TAC's salutary holiday reminder, whatever our positions on helmets are, they're completely irrelevant in the current modus operandi of Australian motor-vehicle culture.
Share |
Posted by Freedom Cyclist at 11:59 PM 4 comments

Why let truth get in the way of good promotion? 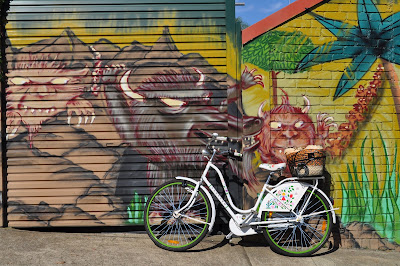 For the past 20 years we have been at the mercy powerful, well connected forces within the 'helmet-manufacturing-brigade'.

Not only have their seemingly entrenched powers screamed discrimination, but they have cleverly fuelled the unfounded hysteria that abounds in our Australian community. Consequently they have effectively 'neutered' our politicians.

Notwithstanding these obvious marketing tactics, our leaders continue to 'duck' behind preposterous protection claims underpinned by opinion and anecdotes.

Undoubtedly a cultural disconnect exists between the 'helmet-saves-lives' rhetoric and actual evidence of fact - and as a result, we suffer accordingly.

I have now reached the conclusion that:

* I have stumped him - clearly

* He is at a loss at what to say next - clearly

...so perhaps I can help with this 'simple solution'...

REPEAL MANDATORY HELMET LAWS!!! - they are never going to work!
Share |
Posted by Freedom Cyclist at 12:54 AM 9 comments

With summer holidays just begining for many, the TAC have put out a timely reminder - a shocking and devasting montage.
Share |
Posted by Freedom Cyclist at 12:49 PM 3 comments

Secret public lives for all 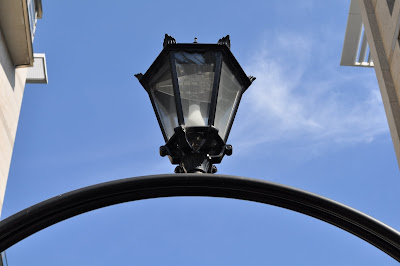 Politics & public life appear to be: 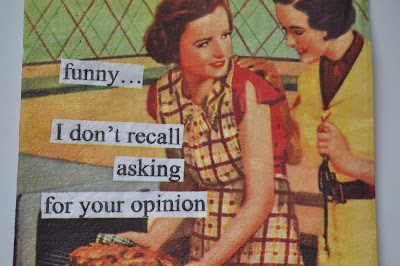 Lady is a Tramp! 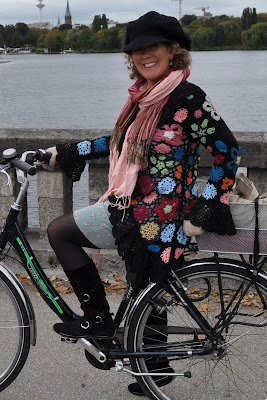 "You're a fucking tramp!" 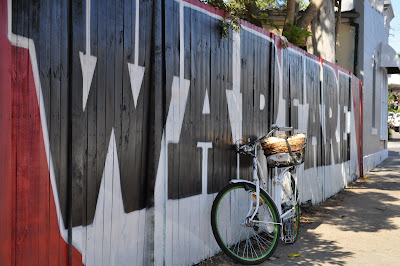 The notion of a 'Playstation Mentality' sums up the vicarious approach to life dictated to by The West's voracious demands to fuel it's 'oil-infused' lifestyle.

Consequently, we implacably ignore 'real-time' human rights if & when they don't suit us.

This questionable behaviour has set us on a destructive trajectory...& is more often than not state sanctioned.

To remain this disconnected is to do so at everybody's peril.
Share |
Posted by Freedom Cyclist at 8:24 PM 0 comments