Australia is such a toddler

Threatened with arrest, ride in the paddy wagon, and prospect of having to apply for bail - jeeeez it's been a bruising end to the week ... sigh.

So to recount, on Thursday my February and April matters were heard in the Scone Local Court.

As per last time (Adelaide) I ran with the Medical Device argument (you know the drill!), and essentially the prosecution just sat back and let the magistrate do all the work proving that I was guilty beyond reasonable doubt.

Handed down two convictions, costs and fines, and a reminder that I could appeal his decision within 28 days if I wanted to (very tempted), I was summarily despatched and sent on my merry way.

And then we came to Friday.

Back in town for the usual hoo-ha that we have to go to town for, I was pulled over twice by Upper Hunter police in two separate police vehicles in a matter of 20 minutes - lights, sirens, action!

I have to say that after eight years of this caper, roadside conversations with the police seem to be getting sillier, and being asked yesterday was I not concerned that by 'not' wearing a helmet I might be 'tempting fate' left me momentarily speechless. After a brief pause I said that I did not dabble in such nonsense and that I was surprised by the question given that I thought the police only dealt with facts and evidence ... sigh.

But it was the second lot who were truly shitty with me and raised the spectre of punishing me for 'continuation-of-the-offence' offence - yes, how would I like to be arrested, and to be put in the back of the paddy wagon and taken to the station with bail conditions applied?

Ordered off my bicycle, I was told to walk it notwithstanding that I was 6km from home

And so I pushed my bike to within 2km when luck would have it that my knight in a not very shining mazda drove past and collected me, bike, baskets and all.

Bugger hey - it's back to the nanna trolley and walking ... 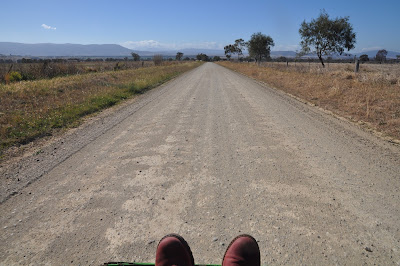 ...  and the odd Christiania ride like today when I 'paid' that knight of mine a compliment ("you look dashing in your shorts, dear") 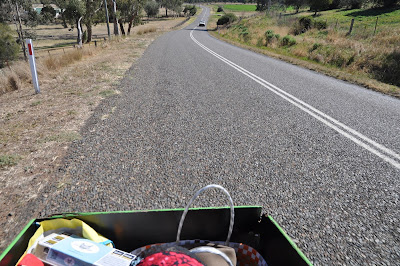 ...and hitched a lift with him 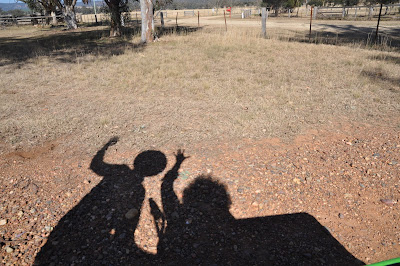 Australia is so very infantile ... how much longer do we have to put up with this redundant state of affairs?

Please could someone actually address the issues I laid out in my correspondence to you concerning my request for a bicycle helmet exemption. To date I have had fatuous replies essentially stating that bicycle helmets make you safer period which completely ignores the crux of my request.

For your information, I have put this argument to a magistrate in the South Australian Magistrates Court in Adelaide. The magistrate has reserved judgment and is now taking two months to read the entire Therapeutic Goods Act.

I will be putting this same argument to a magistrate in the Scone Local Court at the end of this month.

You have the power to give me an exemption under the provisions of regulation 256 (link corrected just now at 23:52 hrs) of the Australian Road Rules.

Please address this matter rather than palming it off to another department.

You do not need to change or repeal the regulation, all you have to do is grant me the exemption as I have requested.

Thank you in anticipation.