Yet another pending bicycle helmet trial So yes I will get yet another opportunity to defend my Australian criminal behaviour of riding a bicycle without a helmet and to highlight the complete nuttiness of this silly regulation.

The Adelaide Magistrate was incredulous when she realised that I had only flown to Adelaide for this pre-trial and nothing else, and she was none too impressed with my brief arguments on discrimination and self-defence.

She tried hard to dissuade me from pursuing my defence quest any further with a spirited spiel on regulations and how they work and just because I didn't like this one did not mean that I could expect to win.

She also raised the sad spectre of me being an 'out-on-your-own-eo' protestor, and that she couldn't see any media in court, so I must be a lone voice, with no groups or individuals supporting me, spending a lot of money on flights and accommodation basically on a lost cause.

In my head I was thinking what dinosaurs the legal establishment are clinging to a media concept of real live 'Murdoch' (this is Adelaide) journalists sitting in court rooms with pad and pencils at the ready, but out loud I mentioned that I have a fairly significant online presence, run a blog and do have quite wide community support across the country.

She sighed, gave me a date in September to which I asked if we could change that given that I have our daughter's wedding then. She enthusiastically put the trial date back to October saying that a wedding was way more important, and then she helpfully suggested I come back to Adelaide on a Friday or a Monday so I could make a weekend of it!!!! Giving me a new date now at the end of October she then said she hoped something was actually on in Adelaide that particular weekend!!!

Such a funny place this country of mine!

And after I was all done and dusted in the Adelaide Magistrates Court,  I enjoyed morning tea with a real live Adelaide supporter before my flight back to New South Wales!!! 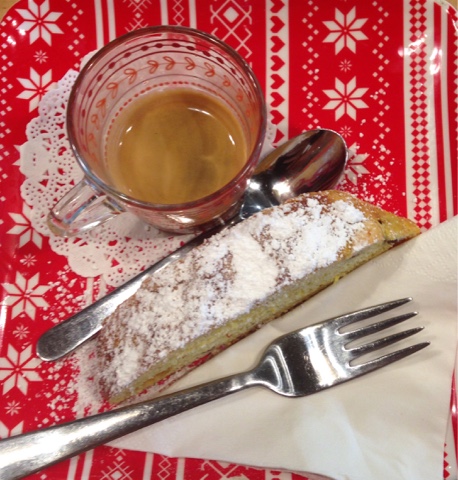 Law of oppression and privilege continues to plague my life 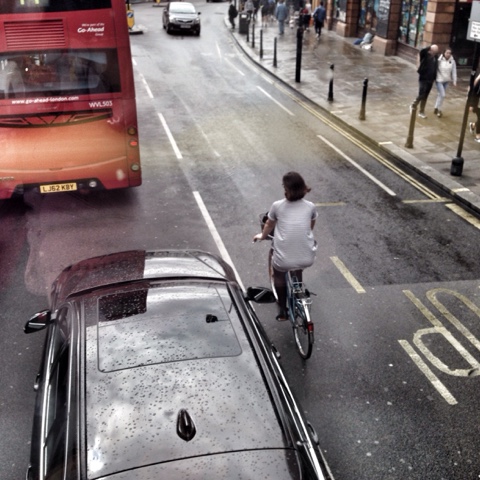 Waiting to board my plane in Sydney which will carry me across this continent to the city of Adelaide for an appearance in the Adelaide Magistrates Court tomorrow.

After seven years of fighting, entailing at least 20 moments in various Australian courts, I'm wondering if we've made any inroads regarding our quest of getting rid of Australia's daft helmet laws.

Given that the rest of the world is cool with cycling without helmet law, it is no wonder that Australia is regarded as a deluded outlier in terms of transport other than private motor vehicles. We refuse to listen to international evidence and instead pedal our half-baked home grown academics' rubbishy studies on the urgent need for head protection law. It's all bunkum and those half-baked academics and our politicians know it.

Anyway I'll keep you posted with what happens in this never-ending Curial adventure of mine.

THE ONLY WAY IS GREEN


It doesn't matter where you live in the world ... the major parties have failed us.

By continuing to vote for the current array of politicians we continue our onslaught on the environment and our people. We cannot expect a change of vision and or leaderhsip with likes of David Cameron or George Osborne or Jeremy Corbyn or Tom Watson or in my part of the world with the likes of Malcolm Turnbull or Scott Morrison or Bill Shorten or Tanya Plibersek ... and if we don't change the mould we will keep getting yet another tranche of democratically elected representatives who yet again come in on our coat-tails only to become the pathetic and destructive cheer leaders for the big corporates (primarily the fossil fuel ones) that we're all too familiar with. 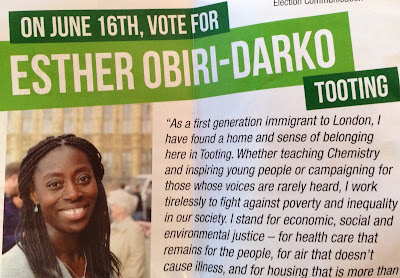 Esther is a tangible hope for the future.

Here is a woman who refuses to be muffled on matters important to her electorate; here is a woman who speaks up for the people of Wandsworth on the issues that really concern them such as the dire levels of air pollution, the planned attack on women's services, and the need to ensure that renting your home is secure and affordable. 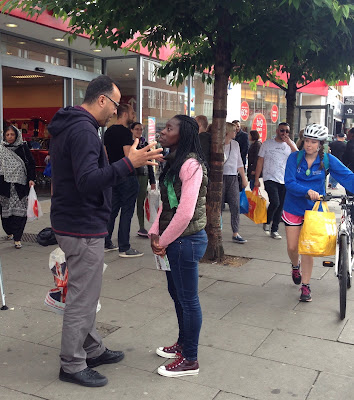 I had the good fortune to be in London last weekend when Esther and her dedicated campaign team took to the streets of Tooting to set up the 'cuppa and chat with Esther on the sofa'.


Completely undeterred by rain, it wasn't long before Esther's wonderful team had furnished a 'Welcome Tent' with trimmings second to none! 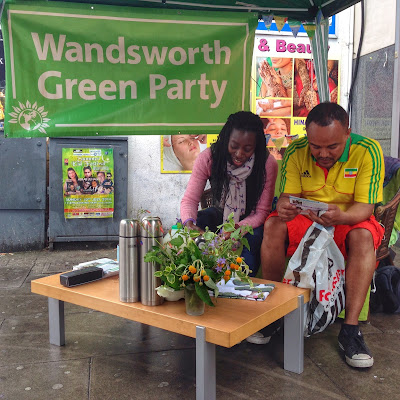 And you would have to admit, there's nothing quite like joining someone warm and friendly for a quick cuppa and a chat, not to mention a delicious Anzac biscuit in this instance made by the fabulous Di (my Australian-living-in-England-chum,) when you have things that really concern you and you want want to be listened to. 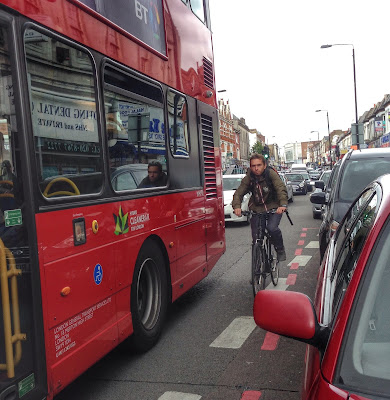 Meeting Esther and her team I couldn't fail but appreciate that the genie is well and truly out of the bottle now, and that the tightly controlled and managed way that politicians to date have manipulated our lives is no longer applicable in today's world.

There's a new type of politician to choose from ... and I've seen the future ...