Sydney, a dream on two wheels 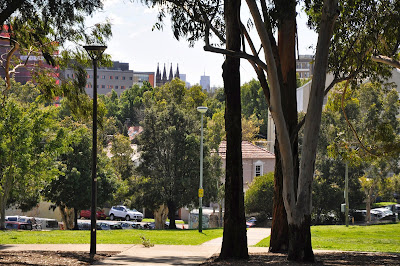 Sometimes the magic is just right there in front of you ... and it nearly always involves a bike! I'm doing a few 'bike-about' stories and I'm hoping you'll come along for the ride ...


There was a fresh chiselled sheen to the Sydney daylight that morning, the sort of high definition type but without the over-exposure so evident in my excitement.

My country chum was coming to town, and we’d both been looking forward to this for quite some time.

With eight adult children between us, plus an additional two new grandchildren in her cache, we’ve been dissecting our lives minutely over kitchen tables for many years, but for this brief moment called ‘today’ we were going to transcend every ‘one’ and ‘thing’ to revel in this sassy city ... as ourselves.

Quickly walking across Newtown Station’s new grey flagstones, I watched my dear friend glide upwards from the platform below as she stepped onto the brink of our adventure - I was about to take her by the bicycle basket and show her the streets of Sydney, in a magical carpet sort of way.

Berets and beanies firmly planted on our heads, we crossed the melee of King Street, walked through the little piazza near the Neighbourhood Centre marked by one of Newtown’s dog statues (for the uninitiated Newtown ♥ dogs), and made our way to Black Star Pastry & Cafe in Australia Street where I’d left two Dutch step-through bicycles under the watchful eyes of a couple of stool-ensconced gateau-lovers.

The bicycle baskets were already packed with picnic goodies gathered earlier, as well as a couple of woollen picnic blankets, a chilled bottle of Verdelho from wine-growing buddies at Denman’s Pyramid Hill, and of course a couple of mandatory ‘Naked Ninjas’ from Black Star Pastry (yes, I had come across an extremely rare moment when Black Star’s usual ‘snaking-out-the-door-and-round-the-corner queue’ was non-existent!).

Purses now added to the baskets, bungyed and finally secured, we set off along Australia Street past the Australia Street Infants School turning right over the zebra crossing (yes, of course we pushed our bikes over it) into Camperdown Memorial Rest Park. This perfect picnic park, our lunch spot, had been a cemetery until the 1940s when the 1948 Camperdown Cemetery Act provided part of it could be resumed and converted into today’s beating heart of Newtown.

There we positioned ourselves on the western rise of the northern side of the park so that we could look down into the grassy bowl and watch Newtown ‘keeping it weird’ as only Newtown can. Of course if we’d been there for a sunset we would have positioned ourselves on the eastern side of that northern grassy bowl for dress circle picnic rug spots to Newtown’s celestial version of ‘Vivid.’

Lolling there in the sun, savouring Sicilian olives and spicy gingerbread men, we soaked up the warmth and the chatter and all the inner west bonhomie before hopping back on our bikes ready for our 24km ride of which so far we had completed 350 metres in the minute it had taken us from Black Star Pastry to the park!

Side by side we ambled through the park heading east, wending a back-street way until Carillon Avenue and Sydney University where twentieth century buildings and twenty-first century students combined to set a surreal academic back-lot scene to our ‘rat-run’ through the university, across Parramatta Road and finally into Glebe Point Road.

We were airborne; our journey had begun.

Flying down Glebe Point Road to Rozelle Bay was as though we’d been given tickets to a free pair of wings, capable of uplifting spirits and bodies so that we could soar like eagles aloft. The cool fresh wind opened up our eyes and our noses and our ears, tuning our senses so that we were ready to dart and dive, and to react to this particular life journey as it happened.

The magic of that moment had us swaying to Sydney’s eclectic rhythm of life, and it caught us in a cobweb of memories from younger days when we used to use our bicycles to explore and play and learn, chasing and travelling through the laneways and gullies of life. Now on bikes together, we were jump-starting soul-batteries that had been left idling.

From this free-wheeling viewpoint we had the impression that we were at the pinnacle of opportunity, and that the junction of Rozelle Bay and Glebe Point Road, shimmering on the ever-drawing closer horizon, was the edge of unexplored space.

Coming into land, we gently taxied around the foreshore of Black Wattle Bay taking in the intricate view of Sydney’s harbour bridges. With Anzac Bridge, the longest span cable-stayed bridge in Australia, commandeering the foreground, and Sydney Harbour Bridge, a steel through arch bridge, bookending the background, these grand bridges left little Glebe Island Bridge, a swing bridge now surplus to requirement, dwarfed and warehoused cut loose from its former existence. 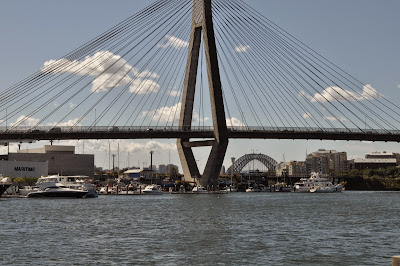 Joining bitumen again after the Boathouse, we turned into the Sydney Fish Markets. Apart from a few tables of ibises, nobody else seemed to be noshing on fish and chips and we were able to navigate our way through the environs of the markets unhindered, re-emerging at the far end of the car-parks underneath the city side of Anzac Bridge where we readied ourselves for the next stanza of our magical whirl around Sydney’s bays, wharves, theatres, cafes and karma.

At Cafe Morso on Jones Bay wharf, we breathed in diamond studded water views whilst sipping dark velvety coffee before continuing to Darling Harbour where the normal frenzied activity was unusually absent, and the habitual crowd along Cockle Bay Wharf was full of easy smiles and salutations. Winging it somewhat, it turned out Barangaroo Foreshore was open so we were able to continue right through eventually exiting left into Towns Place and then left again onto Hickson Road.*

Now with a new runway, we were flying again, past theatres, more wharves, the roundabout with Jimmie Durham’s salutary Still Life with Stone and Car, before shimmying under the Harbour Bridge and melting into Dawes Point Park for a boardwalk drift around oodles of harbour brides, the Rocks and the Overseas Passenger Terminal all the while keeping an eye out for bicycle-trapping ‘tramlines’ en route. 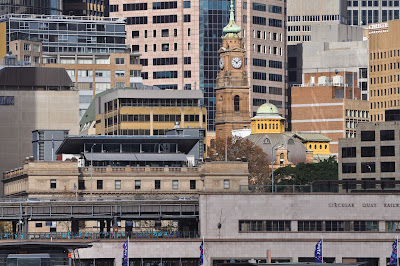 Approaching Circular Quay, the biggest and fluffiest of harbour brides (Sydney Opera House) loomed large, and charming yellow and green ferries bustled about in front giving an impression of busy bridesmaids getting things ready for the never-ending bridal party that Sydney perennially hosts. 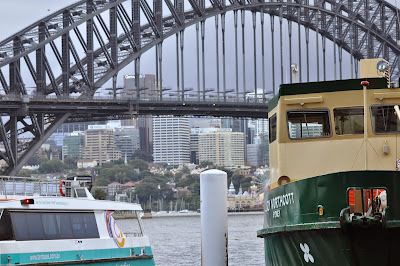 And just like wedding guests, once we were received on our bride’s forecourt, we parked our bikes, grabbed a glass of bubbly from the Playhouse Bar and sat outside to soak up the action of Sydney’s veritable maritime marketplace - bliss.

Bubbly finished and back in the saddle, we climbed Macquarie Street with the steady solid rhythm that Dutch bikes provide.

The State Library, Parliament House, the Eye Hospital, Hyde Park Barracks, all were but buildings in the journeys of our legs as we progressively gained ground and finally benefited from a skerrick of momentum and a handy green bicycle traffic light that conveniently led into Hyde Park North for a quick spin around the Archibald Fountain before leaving the park by the College Street ‘side door.’

College Street’s separate bicycle lane funnelled us past St Mary’s Cathedral and the Australian Museum until we eventually ended up at the start of Oxford Street. A brief little hill climb followed to Taylor Square where we took our chances with surprise under-pavement fountains outside Kinselas before rolling into Bourke Street’s separate cycleway, and the Beresford Hotel for another little bubbly.

Rejoining Bourke Street cycleway, our bicycles assumed trusty time-machine personas as they transported us back and forth between the decades while we pedalled through the peeling faded terraces and the waxy frangipane trees of Surry Hills, before finally turning right into Redfern. We flew past Redfern Police Station, immediately turning left after the Railway Station opposite The Block, the indigenous seat of Sydney tucked in front of the city’s skyline now ablaze with furrowed clouds and daubs of fuchsia.

By the time we reached Wilson Street, the main arterial road for inner west cyclists, we were in formation as we flew past Carriageworks, corkscrewed roundabouts, barrel-rolled up the counter flow section, looped-the-loop at the Erskineville Road intersection before nose-diving at pedestrian crossings on King Street and landing at the front door of Zanzibar Newtown. 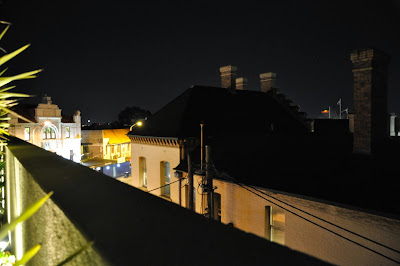 Our final ‘sortie’ up three flights of stairs to the best rooftop garden in the city, we did on foot, and then with margaritas in our hands and Newtown rooftops at our feet, we revelled in the same edge-of-world feeling we’d experienced earlier as we’d travelled around one of the world’s most beautiful cities on a magical carpet made of two wheels.

Basic map of route (google maps got the better of me here so you'll see there are a couple of 'back-tracks' marked that we didn't actually do!)

We used my Gazelle and Electra bicycles but it is possible to hire equally lovely bikes (suitable for picnicking) at:

Each bike comes with a padlock & a helmet

* Foreshore Walk:
According to the grapevine, the foreshore route we took is now closed until March 2015 but the public can still access and leave the harbour’s edge through an opening on Hickson Road. The full 2km foreshore walk around the edge of the Barangaroo site will be open from mid-2015 and apparently people will be able to enjoy an uninterrupted 14km foreshore walk from Woolloomooloo to Anzac Bridge.

If you need further information, I’m here (!) and on twitter too (@freedomcycliste)