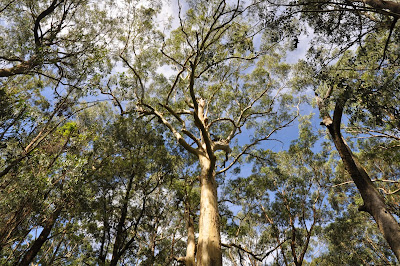 In what ought to be his final year, our son has retreated from the medical school frontline back to our home in the bush, and as his parents, we hope that the nation’s medical schools take heed of Dr Kimberley Ivory’s call to arms.

Along with a sense of worthlessness acquired from ward rounds, his angst was compounded by a lack of cohesive administration from the Joint Medical Program, the much touted medical project undertaken by the University of New England (UNE) and the University of Newcastle to train students to become doctors in conjunction with a rural campus.

He spent the first three years of his medical degree at UNE in Armidale, and then commenced his 4th year (1st year clinical) at the University of Newcastle.

He was also unprepared for the suspension meted out to him at the beginning of the Semester as a result of issues with ClinConnect, essentially the ‘Police Check’ for health workers.

Notwithstanding that the two universities are part of the same joint medical program and the same health authority (Hunter New England Health), ClinConnect compliance proved to be ‘a mountain too high’ for the JMP, and whilst UNE medical school permitted hospital visits by virtue of his police check clearance, the University of Newcastle medical school did not.

Barred from ward rounds and struggling with the administrative chaos over email addresses and student numbers, he quickly fell behind, and the gulf between ‘actual’ student welfare and medical school spin widened in a most Kafkaesque way.

Upon his dismissal, an offer of counselling was proffered and then immediately retracted when it dawned on the interviewing professor that as a result of suspension, our son was no longer a medical student and therefore not eligible for counselling (you can’t make this stuff up).

Despite being reinstated on the course, our son was shaken by this episode and failed semester 1, necessitating a continuation of studies throughout the mid-year break to catch up with missed clinical rotations from the ClinConnect calamity.

He came back to semester 2 exhausted and worried that he didn’t know anything, even though we tried to reassure him that as a medical student he didn’t need to know anything.

But as ward rounds continued to be punctuated by fear of humiliation in front of his peers, his belief in himself was reduced to a whisper and we were not surprised when he subsequently failed Semester 2 as well.

However we were surprised that the JMP’s bureaucratic Catch-22 approach only got worse.

Whilst our son attended the requisite post-fail interview and submitted the requisite ‘show-cause’ form in the requisite time-frame, the JMP failed to contact him before the start of the new medical school academic year (January 19, 2015).

Without instructions from either of the JMP medical schools and not knowing what he should do, he emailed both medical schools on that first day of semester 1 to see whether they were able to instruct him on how to proceed.

He received an immediate automated reply from UNE to the effect that they were addressing his matter.

Finally at the end of the first day of Semester 1 he heard back from UNE that he was suspended for one semester.

In a strange way that final email brought peace at last and a chance to plan. Now the next six months ahead would not be dictated by the JMP or their muddle of email addresses and student numbers or their reminders that he was not a Newcastle student or even the unsettling high turn-over of UNE deans of medicine.

He is enjoying his ‘gardening leave’ and is gradually joining us again in conversation and thoughts, and most importantly his opinion; with regard to returning to the JMP, he is reserving judgment.

We all have a vested interest in the education of our future doctors, and as significant players in this community enterprise, we need our medical schools to play their part in a responsible and caring way … whether they are ‘Joint’ or not. 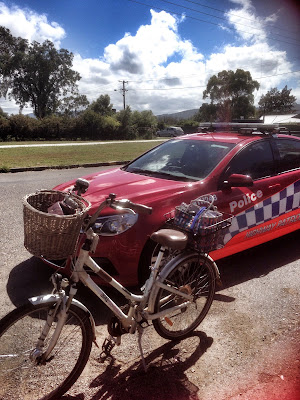 Very quiet sunny day in Scone today so what's a policeman to do?

And so the rather Australian saga of booking people using bicycles to buy raspberries and blueberries when they're not wearing helmets starts all over again.

I had actually waited for their car to go past before I crossed the road, and as they did it did half cross my mind that they might to a u-turn at the roundabout and come back for me.

However so engrossed was I in my 'Infinite Monkey Cage' podcast...

... I got quite a surprise when I realised the siren and lights coming up beside were ... well, for me!

So I hopped off my bike, took out my ear-phones, asked the policeman to wait a minute while I turned off Professor Brian Cox, and then tuned in for the 'Do you know it's against the law to ride a bicycle without a helmet?' spiel.

And so I proceeded to educate the young law enforcer why the law was flawed, and that the benefit claims of helmets and helmet law were dubious, and that scientists across the globe were in dispute on this matter and that therefore it had been highly irresponsible of our politicians to make helmet wearing compulsory on the flimsy advice they had received.

I delved into it a little further for him saying there were no laws to stop us overeating or overdrinking or oversmoking which was a good thing, and that people really ought to be able to run their own lives if they didn't cause harm to others.

I mentioned that I felt I was imperilled by the government and that self-defence was provided to me under section 418 of the NSW Crimes Act. I lost him here a little bit and he wanted to know if I was 'self-defending' myself from him, to which I replied a categorical no, that it was the government's daft law that had put me at risk, not him.

He asked me why I thought such a regulation had been put in place if not for a good sensible reason and I told him that it was the result of good marketing and hysterical doctors - he was very surprised by the 'hysterical doctors' bit.

I also mentioned that when I was booked in Adelaide last year the police ended up not proceeding with the prosecution of me to which he commented that they were probably too busy, to which I added 'doing real police work,' immediately seguing into why I though it was such a shame that regulation 256 wasted his time as well given that they clearly had better things to do than book a middle-aged lady on a bicycle cycling on her way home from the shops listening to a science show podcast.

I can't really remember what else we chatted about but by now he was well and truly leaning on the bonnet of his car whilst his partner-in-police-work, still sitting in the patrol car, was probably wondering what the hell we were talking about for so long.

Anyway with my licence in hand he got back in the car and goodness knows what came up after they punched all my details into the in-car computerised data-bank gizmo but it was clearly cause for much mirth.

Finally he reappeared with my penalty notice (and licence), and we bade our farewells and parted company with me saying as per usual:

(cross posted on Scone blog)
Share |
Posted by Freedom Cyclist at 2:36 AM 4 comments 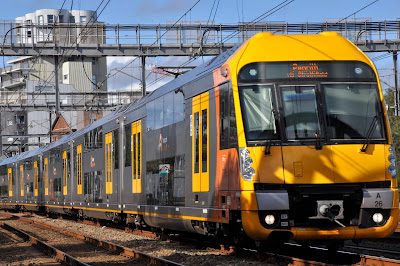 It isn’t only in Newcastle that shockwaves from Newcastle Station’s closure have been felt.

Since Christmas, the impact of the NSW government’s actions to open up the Newcastle rail corridor for development has left countless Upper Hunter families gasping at what this means for them - and they know it ain’t going to be pretty.

Barring the National Party candidate who was too busy to attend, other would-be-candidate-hopefuls for next month’s NSW State election met with concerned Upper Hunter residents in Muswellbrook last week to listen to community sorrow and anger as one of their few accessible life-lines to the city has been systematically destroyed.

Residents expressed their displeasure at the legal hoop-la the NSW government has embarked upon to avoid provisions of the Transport Administration Act which forbids cutting of a railway line except by an Act of Parliament. No-one in the Upper Hunter is impressed by the government’s attempt to vest ownership to the Hunter Development Corporation for railway acquisition purposes nor by their partnership with General Property Trust under the auspices of the government owned Urban Growth NSW. No-one in the Upper Hunter is fooled … no-one.

To a candidate (excluding the National Party one who was not there due to ‘busyness’ commitments), they promised reinstatement of railway lines if elected and manna from heaven - and perhaps we can believe them ... can we?

But it was the stories shared by residents of their life-journeys on the Hunter line that revealed the true extent of the blow dealt by the NSW government to this rural community yet again. The sick and their health appointments, the grandparents and their outings with grandchildren, the students and their classes, the families and their shopping trips, the rites of ‘unaccompanied-teenage’ passage as their families allow them to take the train to the beach (I well remember letting my four go for the first time), none of these trips will be possible anymore if the NSW government has its way and destroys our public asset, our essential rural connection to our city.

Just maybe the fate of the Queensland LNP will be a salutary reminder to Macquarie Street … because given that this government has stopped listening to us as they sell off our railway and our lives, come March we will probably kick them out too.

(Cross-posted at Scone Blog)
Share |
Posted by Freedom Cyclist at 2:09 AM 2 comments