The second half of March 2020 has been like a whole decade and now here we are in April.

To keep you up to speed with my matters helmet, which right now seem so incredibly pointless, I attended Scone Local Court on Thursday 19th March 2020.

However because of all the new social distancing measures in place as a result of covid19, none of us (apart from lawyers, police and magistrate) were allowed into the courtroom.

I did actually have a lawyer this time, so he was permitted to step into court, and from what he has told me I understand that my matter of riding a bicycle without a helmet was withdrawn and dismissed.

So there we have it!

And with the lovely weather we're having right now in the Upper Hunter, I'll be back on my bike (my most favourite of wheels) in next to no time!

... and needless to mention, minus the helmet! 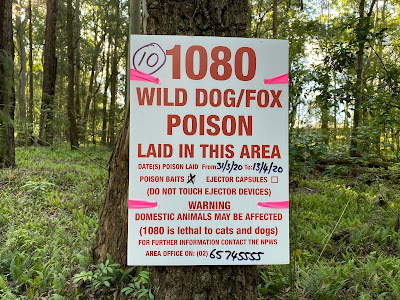 Why is the National Parks and Wildlife Service (NPWS) joining in with the Department of Planning Industry & Environment to be part of this reckless destruction of animals? How does such a poisoning programme fit with their brief? And done from the air too? How can an aerial programme be carefully targeted and administered?

How does National Parks plan on protecting them during this deadly two weeks?

Why are we still obsessed with protecting sheep farming to the lethal cost of Australia's native animals?

I am so sad about this unnecessary indiscriminate killing and I worry about the dreadful effects on both the targeted and non-targeted animal species.

Furthermore 1080 (sodium fluroacetate) taints water supplies, food chains and the general local environment, and death from 1080 is slow and painful and torturous.

But let's just think about the unintended lethal effects on non-targeted native reptiles, birds and insects? Between 2008 and 2015 New Zealand recorded 24 kea deaths caused by 1080 from a population of 199 that were radio tagged.

Surely there are alternatives?

I called that number on the poster and I expressed my dismay, and I was informed someone would ring me but that has not happened. No-one has called me.

If National Parks actually did an audit on all the 1080 they have chucked around our national parks how would it stack up? Has the 1080 programme been successful over the decades? Biodiversity still flourishing? Forests any better for it?

So cynically done as a 'post fire pest relief program' as though that will make our forests safer. I have never seen foxes or wild dogs here in Mount Royal, but I have seen dingoes and quolls and eagles and I feel sick with worry about their safety.

We do not deserve our beautiful country

Sheep - it's time we only counted them to get to sleep - I cannot see the justification in destroying dingoes, eagles, quolls and all the other Australian carnivores. 1080 is so old school, and such a hammer with no finesse, and just a lot of toxic poison that takes out so many animals.

I am so disappointed with the National Parks and Wildlife Service.
Share |
Posted by Freedom Cyclist at 12:07 AM 2 comments