Cycleways need political will - thank you to the Lord Mayor of Sydney! 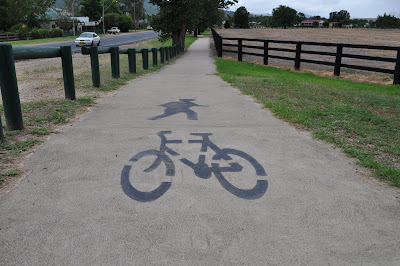 (Scone, Australia, a 'bicycle-helmet-law-land' - our cycleway, going somewhere to nowhere)

Scone is a 'gun-barrel' town with a raging highway 'smack-bang' in the middle, dividing the town into 2. We have 4 schools but only 2 are serviced by this cycleway because basically no-one has worked out how to get the cycleway safely across our 'raging highway'.

When I first arrived in this 'outback town' at the back of beyond (actually it's only 4 hours north of Sydney but I came from London), the high street was an expansive single-lane road, wide enough for wagons to do a u-turn (...omg, I've been here a long time!). However it wasn't long before the Roads & Traffic Authority (RTA) arrived, waving their magic wand and grandly declaring that, 'Scone, you shall go to the ball and you shall join the 20th century - you shall have a new super-duper highway'

...and hey presto! without doing anything except painting a couple of lines down the existing single lane road, we instantly had a dual-carriageway! There was no widening or pushing back of buildings; there were no jackhammers or drills; just a couple of tins of white paint and 'bob's your uncle,' the dual-carriageway was ours!

...but it has been a menace and a mind-numbingly daft invitation to shoot through our town at speed. Consequently, pedestrians and cyclists have been stranded on the 'banks' of the 'raging highway', utterly incapable of 'sharing the road'.

Just recently the RTA revisited our town, and whilst refusing to acknowledge their part in our current highway woes, announced new measures to corral 'road-users-other-than-motorists' into UN convoys in a bid to get us across the 'raging highway' safely!...naturally to arrive at the 'RTA announcement' we had to suffer, and contribute to, the following:

..."and no, Sue, a couple of tins of black paint and reduced speed limits are not the answer"!!!

Shame! Municipal madness! We are 'traffically' doomed and the notion of connecting the cycleway with the 2 schools on the other side of the highway is set to languish indefinitely in our Local Mayor's in-tray - yet where's the community discontent, the community outrage, the community protest?

HOWEVER - STOP PRESS STOP PRESS: 4 hours to the south, the Lord Mayor of Sydney has grasped the 'motoring bull' by the horns and has commenced her ambitious campaign of 'cycleway installation' left, right and centre, valiantly ignoring squeals of horror from her motoring electorate - and she has plans for many, many more (cycleways - ok, maybe squeals as well!!!)