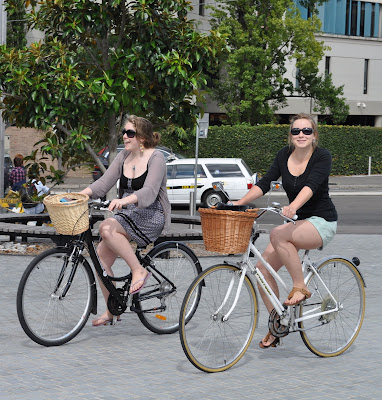 Our mandatory helmet laws have allowed governments to remove our personal authority under the guise of community good.

BUT has it actually been for the community good?

The replacement of our self-autonomy subjected us to a state of 'infantilisation', and academic research continues to question the veracity of the original political rationale. Piet de Jong in his article entitled "The Health Impact of Mandatory Bicycle Helmet Laws" argues that losses to the community have significantly outweighed any initial estimated gains - yet our politicians and media continue to sidestep the helmet debate.

Since 1991, this state sanctioned intervention has robbed a whole generation of young adults of the 'everyday pleasures of cycling'. The outrageous 'danger-mongering' of 'hopping-on-a-bicycle', physically constrained our Australian community and fostered a climate of fear. Unbelievably for a long time we actually subscribed to the 'spin' that cycling was dangerous, required special gear, special bikes and special head armour. In essence, we became a nation of 'scaredy-cats'...

...but 'the times they are a changin', and no amount of rattling the bars and terrorising us now is going to prevent us from leaving the cage - someone opened the door, and we like it out there - on our bicycles!!
Share |
Posted by Freedom Cyclist at 10:30 PM