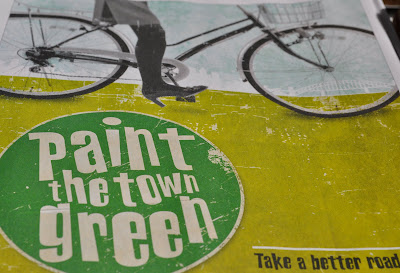 (City of Sydney's logo for Sydney Festival 2010, Australia, a 'helmet-law-land', groan, - note their omission of a 'top-half'! - everyone knows there is nothing chic or inviting about an image clad with a mini-ice bucket - Marketing 101!)

It was so heartening to read Clover Moore's e-bulletin last week and to realise that not only does she understand that we have to adapt to a new low carbon, more sustainable future, but that she also recognises we can learn from other cities who have faced the same issues and inspiringly found solutions.

Here is an extract of her thoughts:

There are many financing options available and Government should not be spooked by the big numbers involved. Investment in transport is an investment for future generations, so debt financing is an option and could be repaid over a longer period to spread the cost burden.

This is a time to be bold and visionary; to make responsible long-term decisions that leave a legacy for future generations. Convenient, reliable and efficient public transport is critical to reduce congestion, cut emissions, ensure sustainable development and keep our City liveable.

...she also continued in her e-bulletin with exciting news of plans to 'share' Johnston's canal pathway:

The Johnston's Canal cycleway has three parts. Existing paths will be widened to connect Bicentennial and Federal Parks with The Crescent, before crossing the canal into Hogan Park in the Leichhardt Council area. After crossing the canal again, the third part of the pathway will provide a safe and direct link for pedestrians and bike riders to Orphan School Creek.

To establish the preferred cycleway route, the City assessed a range of options in conjunction with local residents, bicycle groups, Leichhardt Council and State Government agencies.

Detailed designs will now be developed with further community input. The final design will improve accessibility and amenity for pedestrians and bicycle riders, with new native landscaping along the route and traffic calming devices in Wigram Road.

The City has allocated $76 million to build a usable 200km cycleway network that safely gets cyclists to places they want to go. While the City gives priority to building separated cycleways, some paths shared between pedestrians and bike riders are essential, particularly where there is insufficient space for separated paths.

On shared paths, cyclists need to give way to pedestrians and cycle slowly. Our recent education campaign advised cyclists to do just this-slow down, ring use their bells and maintain a respectful arms-length distance from pedestrians. We also install a range of shared path markings to promote safe riding, particularly at narrow points, blind corners and around playgrounds.

I want to promote a new culture in Sydney where pedestrians, cyclists and drivers share our public space equitably. International cities such as Copenhagen show that large numbers of cyclists can safely and peacefully co-exist with pedestrians and drivers-if the right facilities are available.

The City has received a grant from the NSW Government's Sharing Sydney Harbour Access Program for the Johnston's Canal cycleway project. Work is expected to begin late this year.

The Lord Mayor's initiatives sound amazing - I am so impressed, and citing Copenhagen really shows a committment to change!

...BUT we need to get rid of mandatory helmet requirements if we are truly to get utility cycling off the ground. There are no mandatory helmet requirements in Copenhagen even though the helmet spin lobby looms large. Resolutely they have managed to resist the aggressive helmet promotion so clearly evident in Australia. As a result of 'not succumbing' to the 'shameless spin' broadcast so liberally in the name of safety advice, they have a vibrant cycling city that everyone wants to visit.