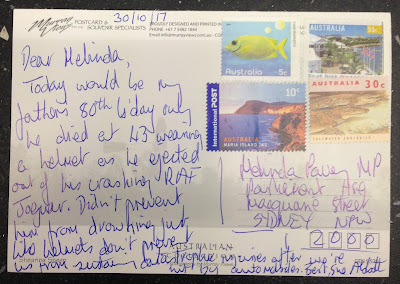 Dear Melinda,
Today would be my father's 80th birthday only he died at 43 wearing a helmet as he ejected out of his RAF Jaguar. Didn't prevent him from drowning just like helmets don't prevent us from sustaining catastrophic injuries after we've been hit by automobiles.
Best,
Sue Abbott
Share |
Posted by Freedom Cyclist at 4:08 PM 0 comments 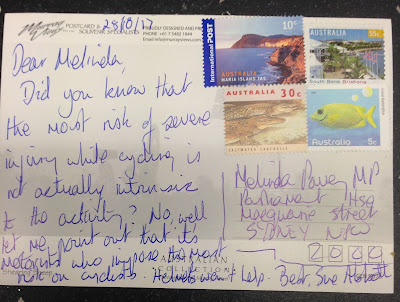 Dear Melinda,
Did you know that the most risk of severe injury while cycling is not actually intrinsic to the activity? No, well let me point out that it's motorists who impose the most risk on cyclists. Helmets won't help.
Best,
Sue Abbott 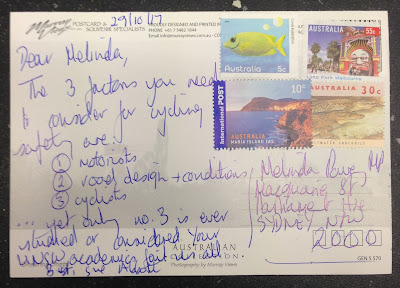 Dear Melinda,
The 3 factors you need to consider for cycling safety are:
(1) motorists
(2) road design and conditions
(3) cyclists
... yet only no.3 is ever stutdied or considered. Your UNSW academics fail us all.
Best,
Sue Abbott
Share |
Posted by Freedom Cyclist at 4:01 PM 0 comments 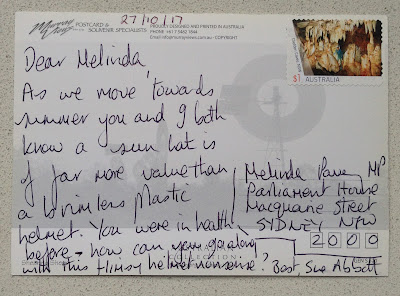 Dear Melinda,
As we move towards summer you and I both know a sun hat is of far more value than a brimless plastic helmet. You were in health before - how can you go along with this flimsy helmet nonsense?
Best,
Sue Abbott
Share |
Posted by Freedom Cyclist at 1:56 PM 0 comments 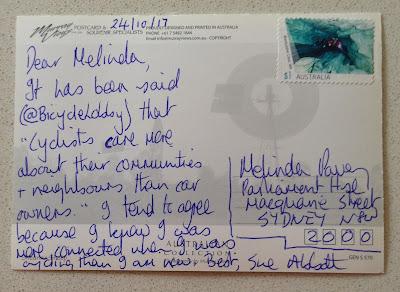 Dear Melinda,
It has been said (@BicycleLobby) that "Cyclists care more about their communities & neighbours than car owners." I tend to agree because I know I was more connected when I was cycling than I am now.
Best,
Sue Abbott 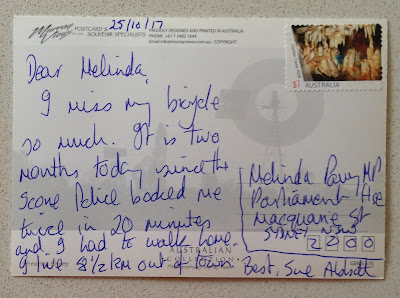 Dear Melinda,
I miss my bicycle so much. It is two months today since the Scone Police booked me twice in 20 minutes and I had to walk home. I live 8½ km out of town.
Best,
Sue Abbott 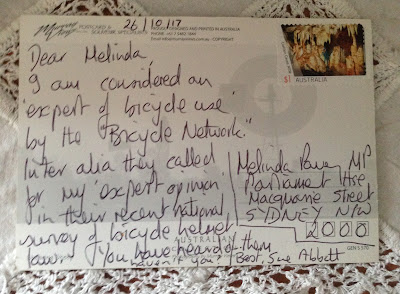 Dear Melinda,
I am considered an 'expert of bicycle use' by the "Bicycle Network."
Inter alia they called for my 'expert opinion' in their recent national survey of bicycle helmet law. You have heard of them haven't you?
Best,
Sue Abbott
Share |
Posted by Freedom Cyclist at 3:07 PM 0 comments 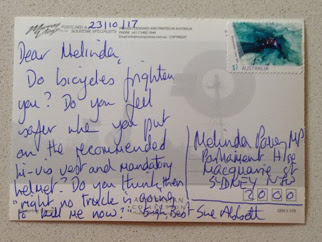 Dear Melinda,
Do bicycles frighten you? Do you feel safer when you put on the recommended hi-vis vest and mandatory helmet? Do you think then, "right no truck is going to kill me now?" Sigh.
Best,
Sue Abbott
Share |
Posted by Freedom Cyclist at 12:57 PM 0 comments 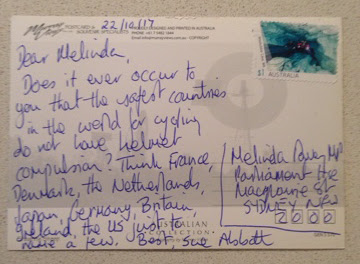 Dear Melinda,
Does it ever occur to you that the safest countries in the world for cycling do not have helmet compulsion? Think France, Denmark, the Netherlands, Japan, Germany, Britain, Ireland, the US just to name a few.
Best,
Sue Abbott
Share |
Posted by Freedom Cyclist at 11:33 PM 0 comments 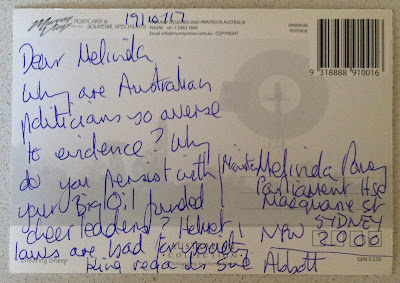 Dear Melinda,
Why are Australian politicians so averse to evidence? Why do you persist with your Big Oil funded cheerleaders? Helmet laws are bad for society.
Kind regards,
Sue 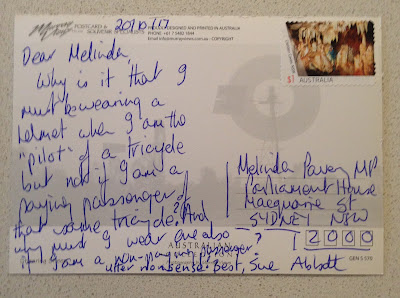 Dear Melinda,
Why is it that I must be wearing a helmet when I am the 'pilot' of a tricycle but not if I am a paying passenger of that same tricycle? And why must I wear one also if I am a non-paying passenger?
Utter nonsense.
Best,
Sue Abbott 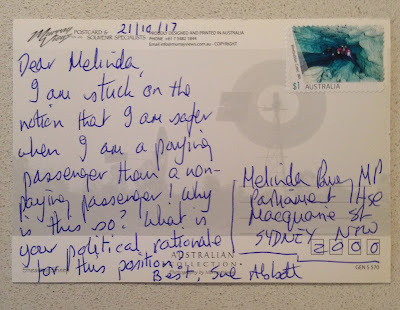 Dear Melinda,
I am stuck on the notion that I am safer when I am a paying passenger! Why is this so? What is your political rationale for this position?
Best,
Sue Abbott
Share |
Posted by Freedom Cyclist at 4:18 PM 1 comments 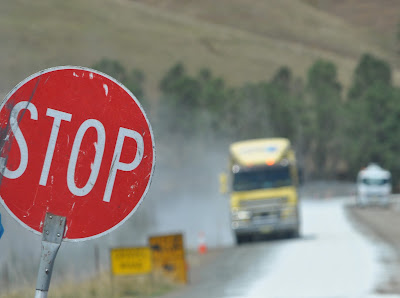 Just a little furry body slumped on the highway.

Globally adored but a dead nuisance in Australia, my heart broke as I passed.

That little koala like so many of our native animals did not stand a chance on the huge enormous 'road project' that is New South Wales.

The current Liberal/National State Government has sold off our valuable and historical public assets across the state to the tune of $9 billion and is now pouring that money into road infrastructure. We quarry indiscriminately, we move mountains all round the countryside, and we cause an inordinate amount of stress to people, animals and plants as we destroy their homes.

That we kill ourselves through road trauma and vehicle emissions is a fact that appears not to alarm our politicians.

That we also kill our native fauna and flora through road trauma and vehicle emissions is a fact that seems to have conveniently escaped them, though the extreme amount of road kill we see on our roads ought to serve as a visual reminder of their glaring political failure to think about transport in terms other than road building. 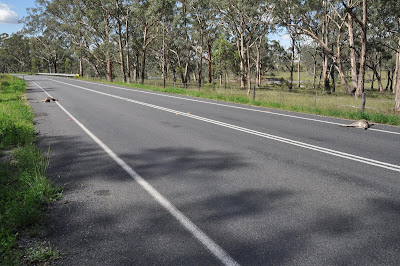 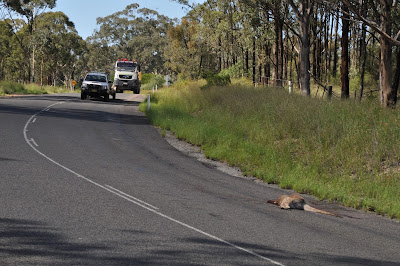 Prima facie our addiction to never-ending road construction must stop.

Vehicle emissions on their own cause 40% more deaths than road toll, and whilst politicians may not have turned their minds to the welfare of our fellow planet travellers, academics are raising the spectre that wildlife does not escape the toxic vehicle emission peril either.

The 'failure' of our governments at all levels to "invest in efficient transport infrastructure" instead of roads continues to cause deadly air pollution.

The oil lobby is strong, and politicians in Australia dance to its tune. Consequently barriers to 'efficient transport infrastructure' (other than roads and automobiles) have been strategically inserted into the Australian transport mix, and this approach has neatly ensured a strangle-hold transport monopoly for Big Oil.

That Honda funds a hospital trauma research program is a 'case in point' in relation to Australia’s political commitment to roads and oil.

That bicycle helmets are still compulsory notwithstanding that the only things bicycle helmets are really proven to protect you from are fines (and perhaps police harassment too) equally shines a light on Australia’s political infatuation with roads and oil.

After 57 years of riding a bicycle, more than 40 court appearances resulting in 7 criminal convictions for not wearing an arguably ‘not-fit-for-purpose’ plastic hat whilst riding a bicycle, and with three more court cases pending for same offence, my preferred mode of transport has come to an end.

I have parked my bicycle in the garden shed.

Ostensibly Australia is the poorer for my action because I, like so many other defeated utility cyclists, have now added one more car into this toxic mix of a country.

There is simply no so safe level of air pollution, and if we keep building roads and their attendant infrastructure our future will be as terminal as that poor little koala’s. 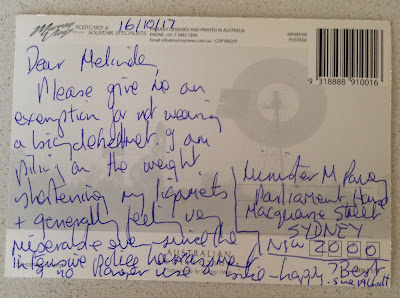 Dear Melinda,
Please give me an exemption for not wearing a bicycle helmet. I am piling on the weight, shortening my ligaments & generally feeling very miserable ever since the intensive police harrassment. I no longer use a bike - happy?
Best,
Sue Abbott 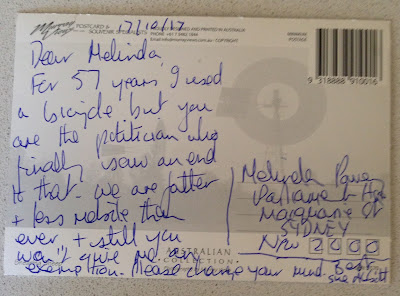 Dear Melinda,
For 57 years I used a bicycle but you are the politician who finally saw an end to that. We are fatter & less mobile than ever, and still you won't give me an exemption. Please change your mind.
Best,
Sue Abbott 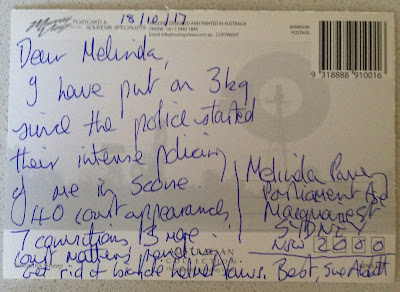 Dear Melinda,
I have put on 3kg since the police started their intense policing of me in Scone. 40 court appearances, 7 convictions, 3 more court matters pending. Get rid of bicycle helmet laws.
Best,
Sue Abbott

Politicians’ Roads Addiction Is Killing Us 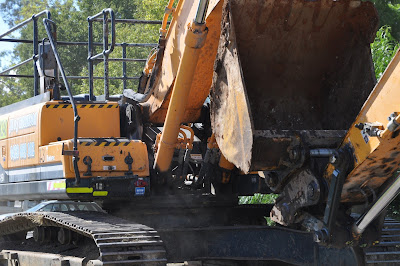 Did you know that vehicle emissions cause 40% more deaths than road toll?


According to a Melbourne University summary of findings published in April this year, there is a direct link between the level of our air pollution and detrimental health consequences, with research suggesting links between air pollution and bladder cancer, Alzheimer’s, stroke, lung cancers and respiratory infections in our children and our elderly.
Yet most of us are not overly concerned by our air quality here in the Upper Hunter.
We live in this beautiful part of the Hunter Valley, enjoying our seemingly clear skies and fresh country air, in reality oblivious to the toxic invisible air-soup we breathe.
It is not for no reason that we have air-quality monitoring stations in Aberdeen and Merriwa, and if you subscribe to the NSW Office of Environment & Heritage air quality alerts like I do, it is always chilling to receive the information text messages when our local air quality breaches national standards yet again.
And now we are about to add a bypass in Scone, as well as a 24 hour truck stop in Murrurundi and potentially a 24 hour truck stop in Aberdeen. Health-wise, none of this is good news.
Four days ago the Sydney Morning Herald reported that new analysis shows “Australia’s love affair with diesel cars has helped push the nation’s energy emissions to a record high” warning the Turnbull government  that “road transport rivals electricity as the most pressing energy challenge.”
The ultra-fine particles emitted from all vehicles including new cars and trucks are inhaled by us all travelling through our bloodstreams and central nervous systems before lodging deep inside our brains, hearts and other organs. These ultra-fine particles also penetrate our skin and can spread through our lymphatic systems. And for those of us who live or work near busy roads including our children in schools and childcare centres, the situation is far far worse.
And we wonder why child asthma is so high in the Hunter Valley..
If we keep building roads and facilitating 24 hour truck stops, we will just keep adding to the mix of contaminated air which in turn will just keep 'driving' premature deaths.
I've said this before and I'll say it again, no matter how anybody wants to spin the facts on roads and vehicle emissions, there are simply no safe levels of air pollution period
Share |
Posted by Freedom Cyclist at 11:15 PM 0 comments