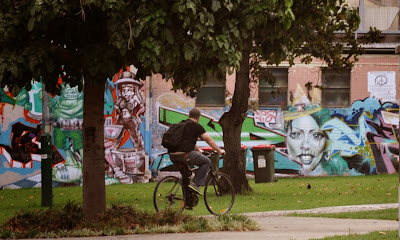 What sense does it make for Australian politicians to cling to bicycle helmet laws when ever since 1899 they've dropped us into conflicts such as ...

... willy nilly at the drop of a hat with nary a sincere thought for anyone's safety?

'NONE' IS THE CORRECT ANSWER
Share |
Posted by Freedom Cyclist at 12:16 AM 0 comments

NSW Trainlink or Countrylink or whatever - you're rubbish 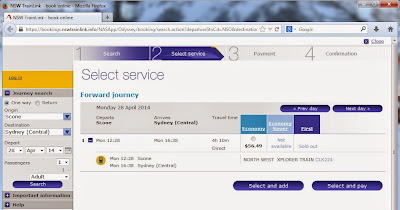 Why, dear NSW Trainlink, was your economy fare today priced at $56, an amount more than the usual first class fare? 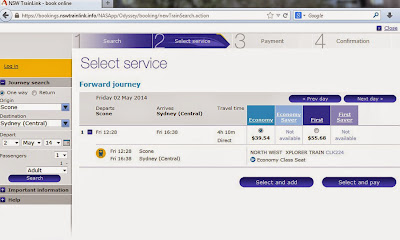 ... and why, dear NSW Trainlink, is your economy fare priced back to the $39 mark this coming Friday (only four days later)?

What was so special about today? 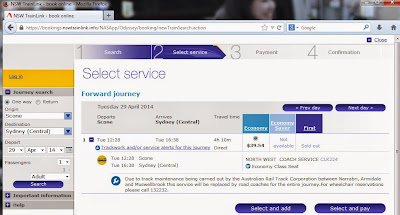 And why, dear NSW Trainlink, is the fare for the inconvenient bus-run tomorrow (commissioned while our regular trains are held hostage for next 3 days to coal lobby) the same as the normal economy fare ($39) for train travel, unless of course you were travelling today when it was $56?

Was there method in this pricing madness? 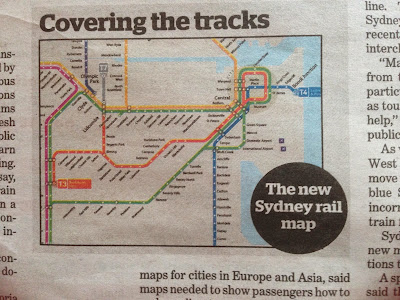 ... and with regards to above snippet of Jake Saulwick's article in last Saturday's SMH, and the question that absolutely shouts to be answered by the minister of maps ... fucking why?

Honestly, why is train travel so hard in this country?
Share |
Posted by Freedom Cyclist at 11:32 PM 0 comments

(My very young parents who had so little time together) 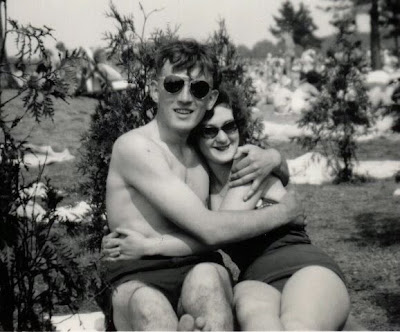 I hate Anzac Day as much as I hate Remembrance Day ... the underlying message behind both days is not lost on me:

[continuous grooming by our establishments to ready us for war]

Our governments certainly don't care, and in order to keep us from subscribing to our rightful disillusionment, they generously offer us cake and circuses on an annual basis ... sigh

So here I am back in Australia, turning off the radio, turning off the television, trying to escape nauseous commememoration ceremonies ... yet in spite of my best efforts to steer clear of it all I can't help remembering anyway the waste and lost opportunities suffered by my family, just for starters, over the last century whether in wars or military action of some other description ...

...and I also remember every day that as a result of the terrible impact military action and the military have had on her life, my poor dear mother has retreated into forgetfullness - 'remembering' (hands off, Lilly, forgetfulness needn't always be about Alzheimers - sometimes it's just a tragic coping mechanism) was too much for her.

When will it stop?

When we will stop listening to the misleading political deception (routinely drummed out on days like today, April 25) that our country needs us to lay down our lives for theirs or somebody's murky geopolitical plan ...

Would that Wilfred Owen's words written on October 8, 1917 had actually dated because they had actually been heeded ... but they have not, and almost a hundred years on they are as tragic and as devastating as they were when they were written about the shocking human carnage of the first world war ...

The sadness, the tragedy, the accuracy ...

Bent double, like old beggars under sacks,
Knock-kneed, coughing like hags, we cursed through sludge,
Till on the haunting flares we turned our backs
And towards our distant rest began to trudge.

Men marched asleep. Many had lost their boots
But limped on, blood-shod. All went lame; all blind;
Drunk with fatigue; deaf even to the hoots
Of tired, outstripped Five-Nines that dropped behind.

Gas! Gas! Quick, boys! – An ecstasy of fumbling,
Fitting the clumsy helmets just in time;
But someone still was yelling out and stumbling,
And flound'ring like a man in fire or lime ...

Dim, through the misty panes and thick green light,
As under a green sea, I saw him drowning.
In all my dreams, before my helpless sight,
He plunges at me, guttering, choking, drowning.

If in some smothering dreams you too could pace
Behind the wagon that we flung him in,
And watch the white eyes writhing in his face,
His hanging face, like a devil's sick of sin;

If you could hear, at every jolt, the blood
Come gargling from the froth-corrupted lungs,
Obscene as cancer, bitter as the cud
Of vile, incurable sores on innocent tongues ...

My friend, you would not tell with such high zest
To children ardent for some desperate glory,
The old Lie; Dulce et Decorum est
Pro patria mori.

There's nothing glorious about war or the military, and commemoration days for the 1918 Armistice or the 1915 Gallipolli campaign are pointless because the one thing that never happens is 'remembrance' ... if it did we woulnd't still be fighting and killing and maiming and dying.

Ok Curly why no helmet?

(The locks that everyone bar me wants to contain) 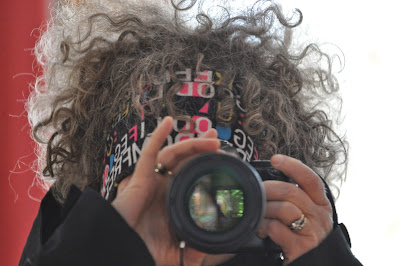 A police car had to wait for me in my Newtown street last week because its very dimensions (the street's that is) dictate vehicles can only travel through it one by one.

I had to cycle over the stop line and through the junction before the policeman could make his move, and when I did finally draw up alongside him, he immediately motioned to me to pull over ...

... here's how our conversation went:

"Why do you think I've pulled you over?"

"Well no, but yes you did so thank you for pointing that out! Why else?

From which point I proceeded to tell him a little bit about me and my campaign for helmet law revocation, and how I believed that helmet law had been more trouble than it was ever worth over the past 20 years.

Seemingly intrigued, he mentioned that he often noticed me cycling around Newtown and that he'd been meaning to stop me re my lack of helmet but to date he had been too busy (well hello, no surprises there - this is Newtown!).

But now he had, and magnificent as my hair was, the policeman told me that it needed to be helmeted otherwise he'd probably end up booking me sometime soon ...

... hmmmm, I haven't been to Newtown Court before ... and coffee breaks could be especially good with Black Star Pastry right opposite! 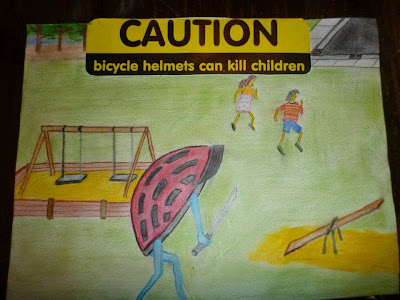 So BN4 was cycling home from Camperdown a couple of days ago, when a couple of lads on a terrace verandah yelled out:

To which BN4 screamed looking around:

Chortle chortle ... they thought she was a hoot and joined in the hilarity calling out:

"Fucked it faster than rabbits"