People who use bicycles are no safer with helmet laws 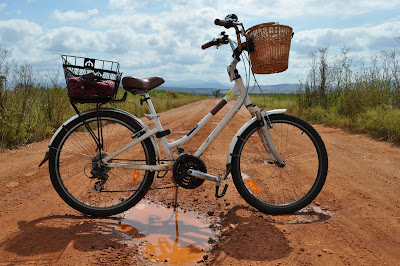 Even as the doors to our 'lab cage' are slowly being prised open, we remain huddled in a corner...

How disappointing it is to see populism continuously trump scientific evidence and facts here in Australia - & why is it that British doctors think otherwise? 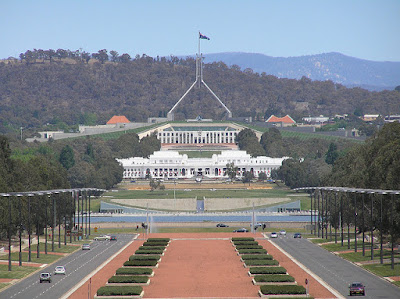 When: Wednesday 21 September 2011 starting at midday

Where: We're meeting in Civic Square, near the Statue of Ethos, north of the lake and close to the buildings housing the ACT Legislative Assembly, and then we're hopping on our bikes and going by road to Parliament House, a distance of about 3 km.

Why: to assemble peacefully whilst exercising our right and our responsibility to participate in our democracy whilst we petition for a redress of a grievance.

Naturally we'll be ringing our bells like crazy and chatting a little on our megaphone!!

...& needless to mention, we'll all decide our hat-wear options!

Our democracy, our rules - let's get the Federal Government of Australia to finally recognise our right to choose whether we helmet or not!!
Share |
Posted by Freedom Cyclist at 10:23 PM 1 comments 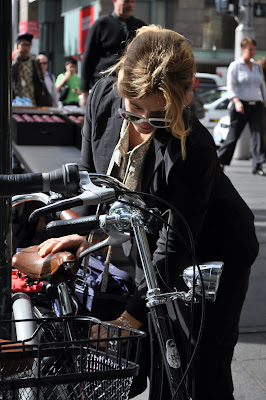 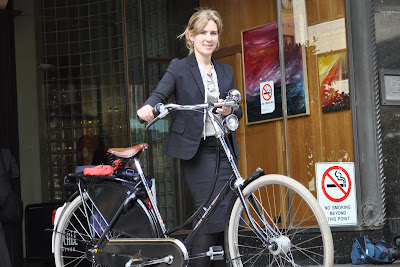 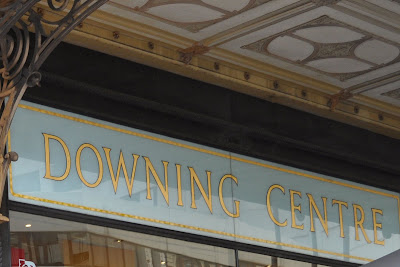 'Abracadabra' & you shall be 'Helmetedl' 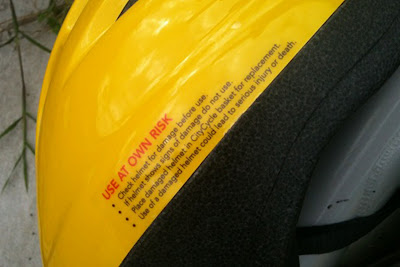 Yet notwithstanding that potential bike-share users & helmet manufacturers know of the risks, Brisbane City Council appear to be operating in a recklessly indifferent manner by ignoring the issue in hand - clearly

Yet how can they reassure us that the helmet hasn't been:

! involved in an impact of any kind

! in contact with certain cleaning products such as bleach

Too too risky, Brisbane City Council!!!...

Cycle lanes for cars - NOT! 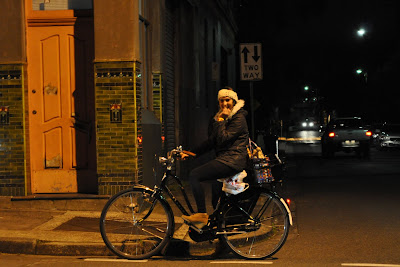 On the face of it helmet promoters don't actually promise that helmets will completely protect their wearers but instead offer a feeling of protection, a veneer of safety...

...which is probably why a bicycle helmet, notwithstanding seemingly fulfilling the provisions of section 41BD(1)(iii) of the Therapeutic Goods Act 1989 (Cth), could never be classified as a 'medical device' because the Act insists that any claims made under its provisions must be proven through scientific tests.

It is patently clear that bicycle helmet testing, with its omission of an 'oblique impact test', does not meet such rigourous standards.

In fact it could even be suggested that perhaps it is not in the interest of helmet promoters to make such catergorical protection claims given that all too often cyclists killed or injured are wearing helmets (66% of pedal cycle fatalities & 82% of all pedal cycle injuries were wearing helmets - 'The Chair's Final Report', NSW Parliament Joint Standing Committee on Road Safety Vulnerable Road Users - Inquiry into Motorcycle and Bicycle Safety; p.22, at 3.55).

Essentially, such an absolute claim would require a higher standard of 'marketing rules'.

Interestingly & somewhat conveniently for helmet promoters, a touch of regulatory assistance absolves them from any likelihood that bicycle helmets could ever be deemed 'medical devices' automatically requiring the higher standard of proof...

Therapeutic Goods (Excluded Goods) Order No. 1 of 2011
5 'Goods that are not therapeutic goods when used, advertised, or presented for supply in a particular way' - Table 1, Column 1, Item no. 4

You've gotta hand it to those helmet promoters - seems all bases are covered! sigh...
Share |
Posted by Freedom Cyclist at 8:56 PM 2 comments 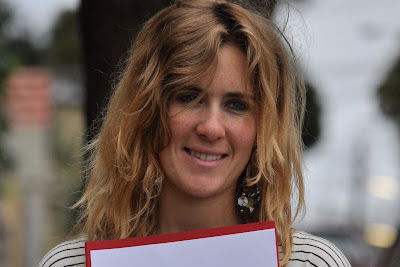 What do you get when you mix?:

♥ Young Australians are speaking out for rights

♥ Young Australians are refusing to be silent or compliant when civil liberties are at stake.

♥ Young Australians understand that civil liberties act as a buffer to 'ever-avaricious-executive-power'.

♥ Young Australians expect the provision of proper evidence when the 'Executive' proposes a 'curtailment' of civil liberties.

...and so next Monday as a result of Australian governments persisting to view cycling through the prism of crime rather than through one of health or transport, Baby no. 2 will raise the defence of necessity in an Australian court of law in a bid to to avoid an Australian criminal conviction for the Australian crime of riding a bicycle without an expensive Australian Standard equipped with a cheap bicycle helmet... 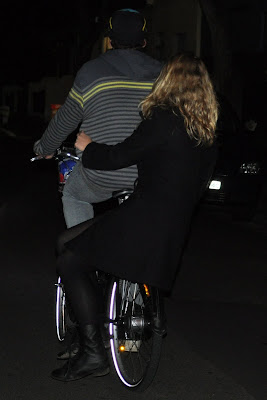 (Aaaaahhh - 2 of my kiddies leaving 'the Courty' last night!!

(1) letter from NSW Attorney General's Department detailing that my 'objection' to unnecessary arbitrary tax is currently under review - will keep me posted, 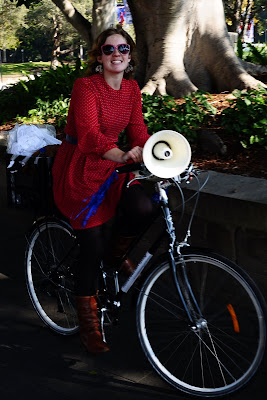 Come Monday 29th August, Baby no. 2 will head to a Sydney court to mention her matter for the crime of riding a bicycle without a helmet.

The obsolescent Australian mandatory bicycle helmet laws have done nothing for us in terms of health, safety, transport, congestion or tourism...

...& in terms of silliness, could even be said to rival the UK legislative prohibition of eating of Mince Pies on Christmas Day - though least the Brits recognise how daft that ban is!!!!!
Share |
Posted by Freedom Cyclist at 12:20 PM 3 comments

Let me show you Sydney 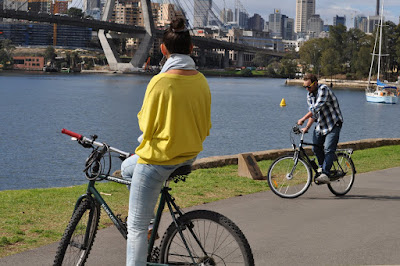 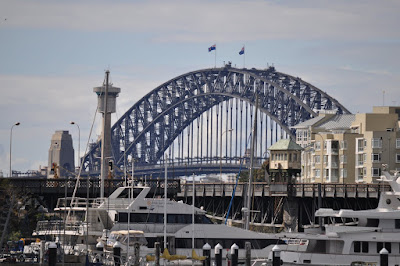 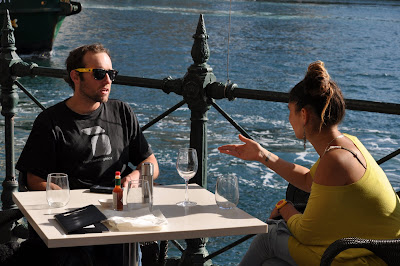 ...& brilliantly, our 'heaven on bicycles' was blissfully enhanced by friendly accommodating Sydney motorists! 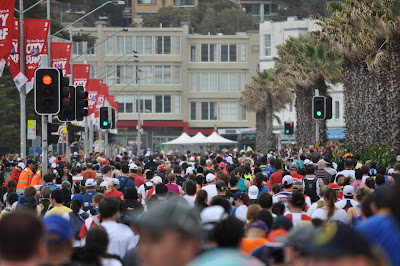 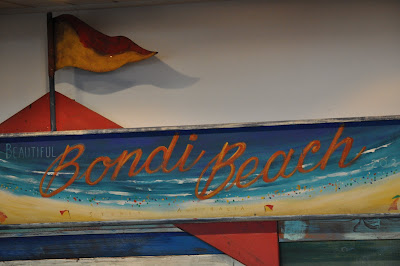 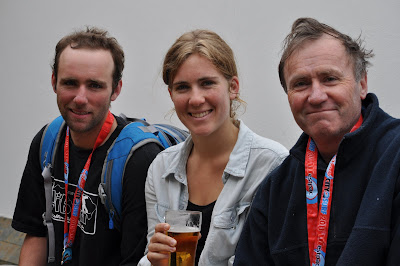 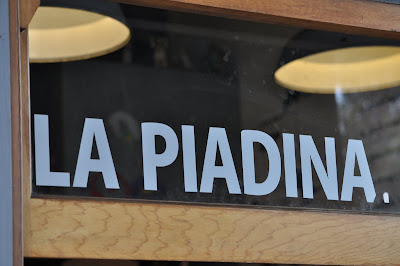 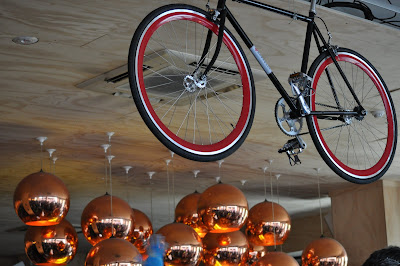 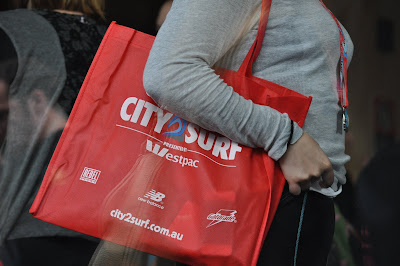 Stands to aussie reason that today's largest 'fun-run' ever will have to be a 'helmeted' one in the future for sure!

The Nation that stopped being itself 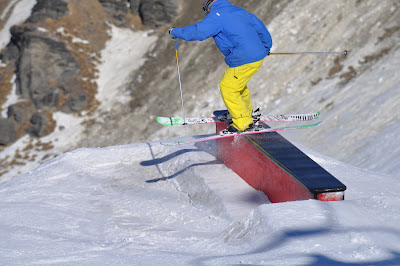 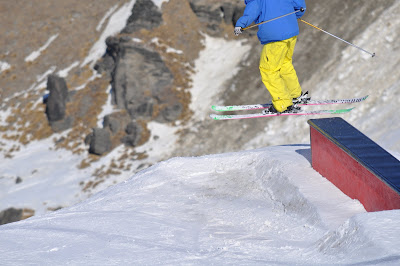 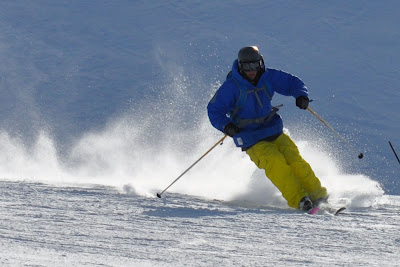 And so it was in a faraway land called Oz, they continued upon their quest for the Total Safety Elixir with strategies that could only ever provide delusion & disappointment...

"Mandatory ski helmets coming to an Aussie Resort near you next season!"

WTF! I want to live in a 'grown-up' country' that steers clear of hysteria & doctors when making policy decisions!

Whilst Baby no. 1 might like to don a helmet on occasion, I certainly would not & I cannot for the life of me see why I should be coralled into a dress code that benefits corporations & defence contractors in the name of safety and so-called common sense grrrr!
Share |
Posted by Freedom Cyclist at 12:34 PM 9 comments 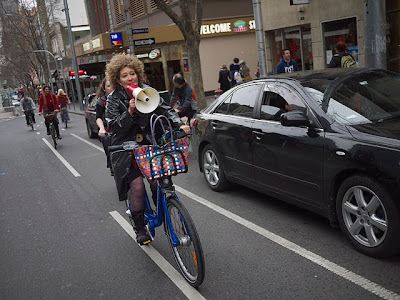 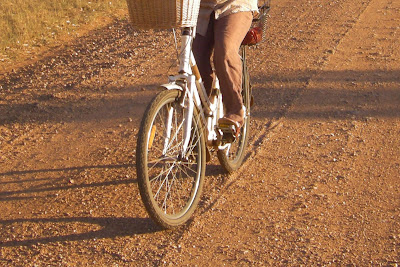 Bicycle helmets in Australia are regulated for safety but we all know that nothing can guarantee that they actually work. We also all know that our corporate watchdog, the Australian Competition & Consumer Commission (ACCC), is supposed to prevent any unsubstantiated claims or implications that products boast about in terms of protection or prevention of serious injury if they can't actually provide them.

Therefore it is at precisely this juncture that our ridiculous helmet laws should have been revealed for what they are by now - false, misleading & unsubstantiated - instead of coasting on the 'do nothing' safety protection policy of the lat 20 years.

'Blind Freddy' can see that under the deliberate guise of 'distraction', bicycle helmet laws have cunningly diverted us away from the only effective protective formula around:

- which translated into 'strine' is: 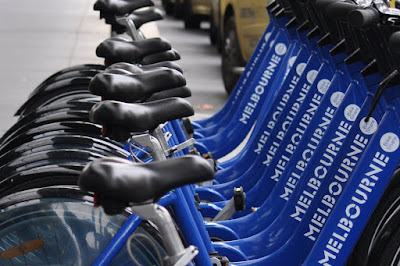 In short according to BMJ survey, bicycle helmet law is insupportable stupidity...