The Helmet Debate has crept into the NSW Legislative Assembly 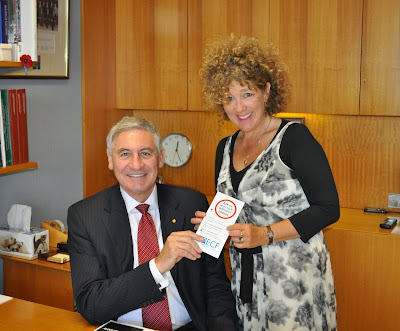 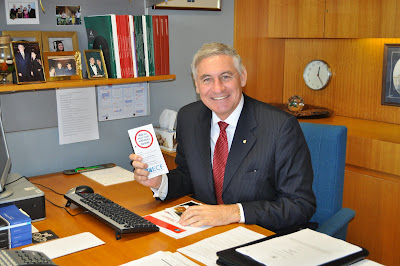 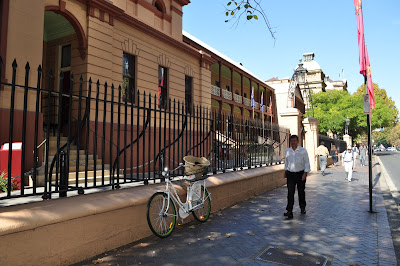 At last the political negotiations have started!

Yesterday not only did I meet up with the Honourable George Souris MLA (member of the Legislative Assembly for the Upper Hunter) at Parliament House in Macquarie Street, but I was the first person to ever do so on a bicycle (see my bicycle above chained to 'my' railings!)...

...granted, he alluded to my 'very uphill battle' to change the law, that at this stage I was in a 'very low gear, that I was going very slowly, and that I was likely to come to a stand still well before the top!' However as I pointed out, I am never averse to hopping off my bicycle (!) consequently no hill, no matter how steep, has ever stopped me reaching the top!! I assured him, I'll be coasting down the other side one day soon!!!?!!!

During our meeting, I gave him the European Cyclist Federation's excellent pamphlet, "Ask me why I cycle without a helmet", given to me in Copenhagen by Mikael Colville Andersen. I went on to elucidate issues raised by the ECF such as the perils of portraying cycling as far more dangerous than it is, the notion that bicycle helmets offer far more protection than they actually do, and that governments ought 'to refrain from promoting or enforcing helmet wearing without sound evidence that this would be beneficial and cost effective compared to other safety initiatives.'

I also included in the Honourable member's 'document parcel', a copy of the RTA internal memo detailing that helmets for certain headforms could well provide a 'disbenefit', as well as the excellent chapter by Bill Curnow, ‘Bicycle Helmets: a Scientific Evaluation’ in Anton de Smet (ed), Transportation Accident Analysis and Prevention (2008) 139. The Honourable member in his turn gave me the most excellent advice coupled with a clear template on techniques for political persuasion!!!

Yes! I have some homework to do BUT I now have a defined pathway with the legislators in mind; I'm on the right track; and I am prepared to push my 'political-bicycle' up the hill for as long as it takes!!!!

Thank you, George, for giving me your time and consideration!!! - "I'm on to it!"

In response to my letter to the Mayor of London a couple of weeks ago, Boris Johnson's Public Liaison Officer has written to me to let me know that "the Mayor has gone on record as saying that it is a matter for the individual to decide to wear a cycling helmet."