EDs add to danger-mongering of cycling 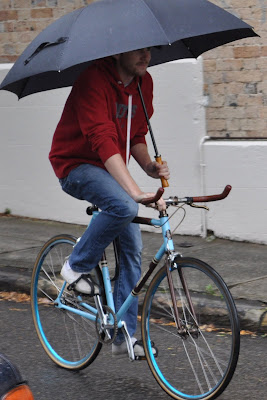 OMG! here we go again - nothing in this letter published in today's MJA (Medical Journal of Australia), should convince politicians NOT to repeal bicycle helmet laws.

The collection of figures and stats always contains many variables and invariably is 'cherry-picked' to bolster the finder's fixed beliefs. It's common knowledge that we seek information to prove categorically our 'point-of-view'.

ED doctors are no exception - they believe in helmets...

Joking aside, given the current academic debate on the issue of mandatory helmet laws within our community, it is a great shame that the RPA survey adds nothing of any substance to it.

Certainly not the Australian public.

Due to a tricky little issue called ethics, testing for helmets remains loose and sieve-like - always will.

As Dr Ian Walker, the eminent British scientist and researcher, explains in Tom Vanderbuilt's 'How We Drive' blog, no-one in the world knows whether bicycle helmets save lives or not for certain because:

Dr Walker goes on to succinctly point out, that the only evidence that will ever be available is indirect:

"...casualty figures, surveys and observational studies, all of which are riddled with biases...and for every piece of evidence we can find in one direction, there is another telling us the opposite..."

...hence the RPA study and it's findings, so opposite to the most recent peer-reviewed academic study. How does a government ever choose which study it will use to influence policy?...1 potato, 2 potato, 3 potato, 4...?!

In fact I would like to ask Dr Dinh to explain why, if helmets have done all they were cracked up to do over the past 20 years, this has proved so difficult to actually see here in Australia and why other countries around the world use us as the example for not introducing mandatory helmet laws?

But I digress - let's get back to Dr Walker who has more to say (do read his complete 'guest appearance' in Tom's blog):

"...in countries where helmets have been made mandatory, and where usage went from low to high levels almost overnight, there is just no real evidence of a concomitant drop in injuries. Indeed, what we see instead is a big drop in the number of people cycling, which is a disaster – far worse for public health than the few head injuries the helmet laws tried to prevent. Whenever a person gives up cycling, they get far less day-to-day exercise. This means they trade a very small risk of dying from a head injury (almost certainly smaller than you think – I can almost guarantee it won’t be a bicycling head injury that sees you off) for a greatly increased risk of dying early from heart disease or cancer (almost certainly larger than you think – I’d lay good odds that one of these two will get you)."

By refusing to relinquish our faith in helmets & helmet laws, we exhibit wilful blindness in our duty of care to vulnerable road users - what a pity we are such a negligent nation!

For the record, Sydney Morning Herald, in para 11 it's 'diffuse axonal injury' NOT 'diffuse external injury' which you persist in (mis)quoting!

...and also, I didn't think I'd ever be saying this, but I agree (!) with Minister Borger's insightful labelling of NSW Labour's 'dead & lifeless'...'urban failures' - WOW! what an admission on his part! way to go, Minister!

Notwithstanding, I'm somewhat confused where he was going with this admission though - was it an indirect attack on Clover's wonderful plans for George Street which are anything but 'urban failures'? - surely not!!!!

* by making sure you IGNORE the RPA ED spin x x