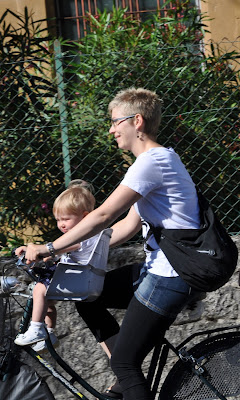 When bicycle helmets were launched onto the unsuspecting Australian public in 1991, their illusionary allure of safety was pedalled further by those who had an interest in them...aka helmet promoters - no surprise there.

But why did the Australian media just parrot the delusion in their annoying pollyanna manner which has continued to this very day?

I will never get why the Australian media didn't see that mandatory helmet laws were just a pseudo-solution to road safety, nor will I ever get why they embraced them so wholeheartedly without questioning any of the data presented whatsoever.

Brilliant PR, brilliant spin, yes...but as a result helmet promoters and their industry of manipulation have hoodwinked the Australian public without ever being properly held to account - ahem, 4th estate, where are you?

What really intrigues me is that more and more whether via travel, or blogs or other social media, we're discovering for ourselves the big world out there uses bicycles mostly without helmets yet instead of us then thinking something like...'ok maybe it's not so bad after all - why don't we try it too'...we succumb to neat little 'psy-op' manoeuvres that deftly remind us that despite fabulous overseas bike share programmes and fabulous bicycle cultures anywhere-else-but-here we Australians still need bicycle helmet laws - why do we fall for that crap?

If the ABC had someone doing a 'video news release' (VNR) from Leipzig on The Business last week, why didn't they have someone covering Velo-City 2013 in Vienna, just down the road.

Arguably one of the biggest bicycle conferences in the world with all 'Matters Bicycle' completely covered, the Australian mainstream media were sorely missing in action - pathetic, and there's no way I'm going to fall that neat little brainwashing message broadcast on The Business whispering to me that 'no matter what you see around the world, you, my dear, still need your mandatory bicycle helmet law.'