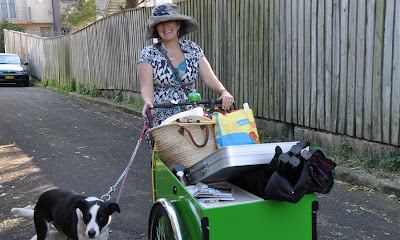 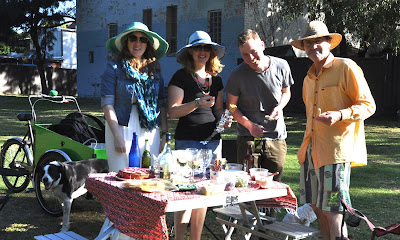 The University of New South Wales (UNSW) has been a big backer of mandatory bicycle helmet laws for more than two decades.

In fact it could be said that by specifically pursuing this line in the helmet stakes, UNSW positioned themselves to receive a continuous flow of dollars through Australian Research Council (ARC) grants and in effect has subsequently become the governments' go-to rebuttals department.

Now a couple of new papers extolling the virtues of bicycle helmet law have been added into the bottomless-cup of our very own uniquely Australian academic bicycle helmet ping-pong competition. 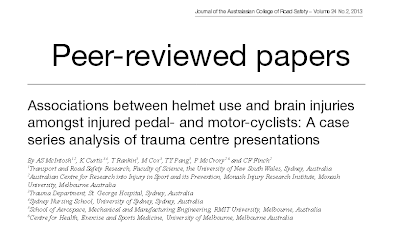 To date LP0669480 has already provided us with this paper and that paper, and from recalling what used to be listed on the School of Risk and Safety Science website this one and that one too, along with research assistants guessing by ads placed on UNSW's website and even websites overseas (p8) with this mob just for starters (nice work if you can get it!).

So here I am, preparing to defend myself against the NSW State government in court next week for the crime of riding a bicycle without a helmet and I'm screaming from the roof tops because it looks like this perpetual quest to prove that bicycle helmets are more that just a Harry Potter mantle of safety is going to carry on forever despite the cost to Australia both publicly and individually...

(elected reps, why can't you see this?)

My mind has gone into overdrive!

I have long wanted to know, right down to the very last cent, the full extent of bicycle helmet research funding, how it is acquired and how it is spent. Given the Australian public purse has had bicycle helmet research foisted upon it for decades, in my view we have a right to see the breakdown of costs especially when you consider that we've been forced to pick up so many bills including the one covering law enforcement and punishment in a bid to ensure compliance.

And now with these new papers on the scene, I remember that I've been wanting to know for ages how far an Australian Research Council Linkage Project grant stretches and for how long?

... because the really big question here that needs to be answered is what exactly is the financial role the 'partners' play in this academic ping-pong exercise, you know those 'partners' which are so evidently drawn from the Oil-Using Bodies?

... and thinking of Oil-Using Bodies, that in turn has prompted me to think about the failed Melbourne bike share scheme and why the RACV put in a tender to operate it in the first place, and why that tender was ever granted to them?

... but my mind is revving out of countrol ... back to the issues at hand stirred up by the arrival of these new research papers ...

Why does the Australian Transport Safety Bureau care enough to be a partner in bicycle helmet research?

Why does the NRMA Motoring and Services care enough to be a partner in bicycle helmet research?

Why does the Roads and Maritime Services care enough to be a partner in bicycle helmet research?

Why does the Transport Accidenct Commission Victoria care enough to be a partner in bicycle helmet research?

Why does DVExperts International care enough to be a partner in bicycle helmet research?

And how much do they all put in?

And what's in it for them?

Anyhoo, notwithstanding all of that, according to acknowledgments in the new Traffic Injury Prevention article, work was conducted at the Biomechanics and Gait Laboratory, School of Risk and Safety Sciences. 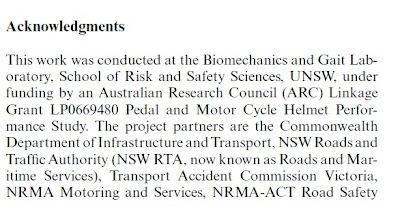 But 'why is it so?' when we know that the Biomechanics and Gait Laboratory spectacularly went to custard several years ago after it was discovered that...

"...errors in the software that analysed the walking patterns of disabled children had gone uncorrected for a year, putting children at risk of undergoing the wrong operations and infuriating doctors"

... followed by the School of Risk and Safety Science also going to custard which in turn was then decommissioned in December 2010? 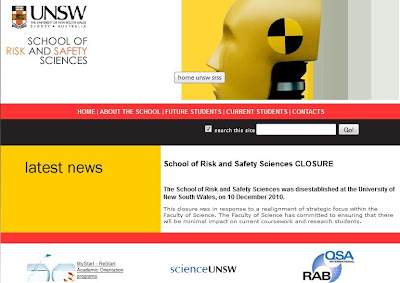 If this is the case as we were led to believe, where exactly have the authors been conducting their work since 2010 when the lab and school were reported to have closed? Or didn't they ever shut their doors?

And what can we take from these new findings? Are they actually new or conveniently re-purposed to fit the government position in the face of growing opposition to helmet law?

After last month's drug trial suspension and the recent collapse of UNSW's ethics committee throwing the future of critical projects into flux, I couldn't help but be reminded of concerns that I'd had in 2010, and others had had in 2011 and 2012.

At the time I had written to the Minister for Roads and Transport about the then widely-acknowledged academic unrest at UNSW’s School of Risk & Safety Science and the impact that may have had on sponsored policy studies that government relied upon to uphold bicycle helmet law, namely this one.

Back then Associate Professor McIntosh was a staff member of Delta-V Experts (a partner company and a company dealing in crash-investigation, biomechanics, injury & ergonomics, engineering consulting and workplace safety) and a member of the Standards Australia committees for pedal cycle helmets, equestrian helmets and the helmet test methods.

I felt that in these roles it was questionable whether the interests of the general public stood to be served in an independent manner juxtaposed against the interests of Delta-V Experts and Standards Australia which could have been said to have been served by finding in favour of bicycle helmets and further crash investigation studies.

The impact of bicycle helmet research has had far reaching consequences for Australia and it is not lost on me that this research has ensured that many of us remain criminals at large whenever we ride bicycles without helmets. Consequently as the major stakeholders that we are we have every right to inquire whether the research has been suitably independent.

I broached these concerns along with others that I had in a submission to the chairman of the Australian Competition and Consumer Commission (ACCC) in September 2011 because I felt they raised questions that warranted answers ... and they still do.

At one point in time following the money seemed a logical course of action to find some answers but a freedom of information request to the Australian Research Council for information on all bicycle helmet studies conducted in the last 25 year period took two months before I even got a response... 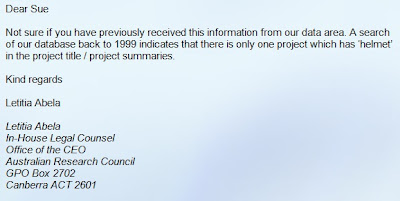 ...and that response left a lot to be desired.

Given the resources at their fingertips it was beyond belief that they could only find one project title amongst their data. I had already discovered considerably more than 'one' on their very own ARC website - I just wanted to know the full extent of public money forked out by us ever since helmet promoters thought it would be a good idea to introduce helmet legislation using academic cheerleaders to facilitate it.

But back to these recently published papers and my looming court case and Australia's questionable oil culture, the money angle behind it all continues to intrigue me...

... so putting aside the public funding, what finanical arrangements are entered into with the aforementioned partners in the ARC Linkage Projects?

And how much is spent by one and all on trotting academics around the globe to do their paper rounds?

And why is it so important that Australia has helmet legislation when the evidence has never stacked up, and still doesn't?

And one more question, why is it always so hard getting access to these purportedly 'publicly' funded studies - shouldn't they be 'publicly' filed somewhere really obvious so we can get to them easily whenever we want?

Follow the money and it doesn't take much to elucidate that the 'bicycle is a real and immediate threat to the car industry' ...

(YouTube, TEDxCopenhagen - Why We Shouldn't Bike with a Helmet)


...and oil lovers are having none of it.