Safety in numbers - a natural phenomenon 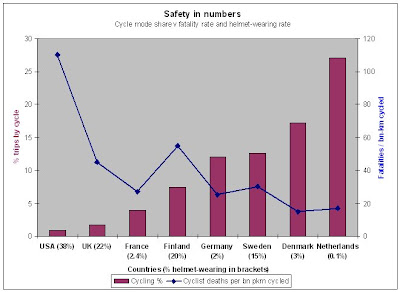 In effect by forcing us to wear helmets, Australian governments discouraged cycling overnight and, notwithstanding strident arguing to the contrary by helmet proponents, Australians demonstrated clearly that they preferred not to ride rather than wear a helmet. Cycling dropped by some 40% yet the actual head injury numbers did not change, and interestingly, we suddenly started talking actual numbers for head injuries rather than percentages.

By subliminally presenting us with the spin that cycling was inherently dangerous, cycling was completely hi-jacked and re-badged. Enthusiastic support from the easily regulated Bicycle Organisations ensured that cycling was now the domain of macho thrill-seekers looking for an extreme sport, and required a badge of 'armour' before any 'mission impossible'. What a nirvana for 'Big Helmet - a manufacturer's heaven!

But there was a "flip side", and Australia paid dearly. The decrease in the number of cyclists meant that it became more dangerous for the few remaining as motorists became less and less used to seeing or expecting to see cyclists on the road. Also fewer cyclists meant that there was an increase of motorists on our roads which in turn resulted in more danger for all motoring, cycling and walking road users...and the 'slide down the slippery "flip-side" slope' continued with more motorists meaning more energy use, more pollution, and more global warming.

So what to do? - it's simple - urge our governments to refrain from restricting our choices.

Mandatory helmet laws ought to be repealed, and voters ought to be able to decide whether to helmet or not. Restricting cyclists' choice is inconsistent and discriminatory, and there are minimal public benefits. A true evaluation of our 'helmet' experience would demonstrate that mandatory helmet laws have been an unmitigated municipal disaster. With our helmet laws banished, we would watch the 'safety in numbers' factor kick in and cycling revert to its natural status in utility transport.