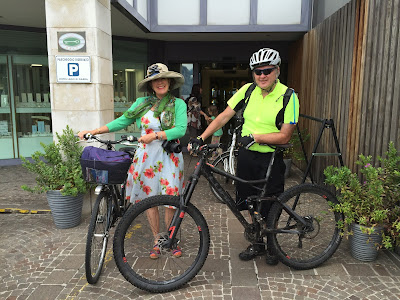 In the state of New South Wales (NSW) where I live, the NSW Roads minister is a former truckie and it shows.

His approach to road safety for vulnerable roads users has completely missed the necessary point of providing actual road safety, and his new expanded Road Rules which entail whopping great fines for cyclists and future ID requirements have placed these cyclists on an equal footing with motorists in terms of culpability. Cyclists have been ‘frogmarched’ as equal partners into a road law of oppression and privilege notwithstanding that they are the vulnerable the road users. Cyclists have never been so at risk on Australian roads.

Now to spice up this very toxic mix of bicycle-demonisation let’s add a little mandatory bicycle helmet law, a veritable corporate cul-de-sac if ever there was one.

Through industry acrobatics and academic false promises, the framing of our very Australian mandatory helmet laws has become the dominant ideology in Australian bicycle culture over the past 25 years since they were ushered in.

Our comforting helmet-safety myth, in which all Australians are fully subscribed, is received wisdom and embedded in the Australian psyche across our entire sun-burnt country ... BUT ... by prescribing cycling safety through mandatory plastic-hat wearing, bicycle helmet laws have failed to articulate the actual and inherent danger of cycling which is the direct contact with motorised vehicles.

As a result the progressive erasure of everyday ordinary bicycles from Australian roads has been evident - oh yes, Big Oil, beloved by Australian politicians and their super accounts, rules here.

Now it gets personal because I am one of the unusual ones; female and middle-aged and still out there on my everyday ordinary bicycle … but not in their prescribed plastic headwear designed for sporty types and velodromes. No the hats I wear are big-brimmed ones for our rather steamy summers and woolly berets for our rather chilly winters.

As you can imagine this behaviour has not gone unnoticed by the authorities.

After 20 plus court appearances (with two more pending) I now have three criminal convictions for the Australian crime of riding a bicycle without a helmet - why heck with my criminal record I can’t even visit the United States!

But I digress … let’s check out emergency departments (EDs) in Sydney hospitals, where some eager-beaver doctors have widened the definition of brain injury to encompass unreported brain injuries … yes I am ‘fair dinkum’ … we now have this ‘silent majority’ noted in ED data and used to support mandatory helmet laws, one so silent as to be undetected by actual statistics or evidence!

To add to our miserable transport dilemma, our politicians are also aided and abetted by unelected yet ambitious middle-aged-men-in-lycra (mamils) running bicycle kingdoms, and let me tell you they adore that ‘silent majority’ paradigm.

The whole ‘bicycle safety via helmet compulsion’ issue in Australia is poisonous. Bullying prevails and kills off dissent in a most anti-intellectual manner. You only have to look back a couple of years when the eminent British neurosurgeon, Dr Henry Marsh, gave his expert opinion at the Hay Literary Festival that bicycle helmets were a waste of time. Holy moley, Australia fainted, and our media went into a frenzied melt-down, permitting evangelical-helmet opinions from non-expert bicycle bureaucrats to trump Dr Marsh’s expert one every time.

As a nation, we have truly embraced collective stupidity. We have allowed a boys’ locker room mentality to pedal the incoherence of helmet law safety concepts, and none of the elected or unelected folk involved in running NSW roads speak for cyclists like me, nor do they want to.

This is Australia, and we get what we’re prepared to put up with … sigh.