"To cross or not to cross" - Sydney uni picket lines 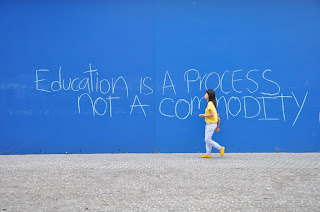 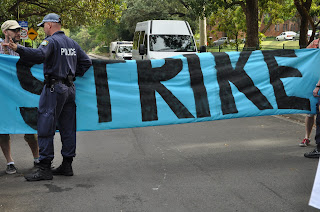 ... as disgruntled staff manned picket lines at all entrances of Sydney University.

Supported by members of National Tertiary Education Union (NTEU), Community & Public Sector Union (CPSU) and students, the staff continued to protest against management’s continued erosion of tenure and casualisation of the workforce. 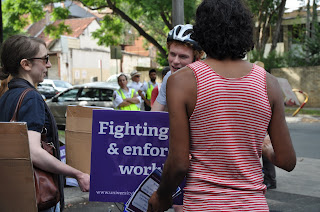 Patience was tested as ‘non-striking' staff, students and visitors attempted to enter the university... 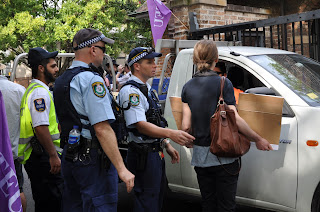 ...and were verbally discouraged from doing so by picketers. 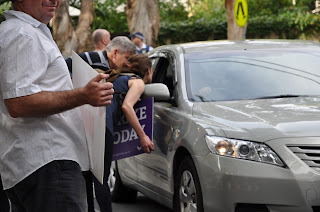 At the Carillion Avenue entrance one picketer was brushed by a car as police waved the vehicle through the entrance to prevent potential road blockages. 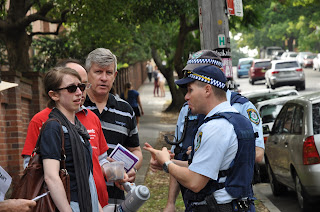 A visibly upset Bryony Nielson, casual tutor at the University, remonstrated with police that they were ‘purely concerned with traffic flow rather than protection of negotiators who are here with a legitimate grievance.’ She was disappointed that police were more engaged with keeping traffic order rather than ‘respecting the rights of people on the picket line.’

‘We didn’t choose to sacrifice our pay today,’ she said, ‘we didn’t choose to inconvenience the students; but we have been given no choice. We have had endless meetings with management with only symbolic gestures and without transparent real discussion – no rep is ever sent who can do anything.’ 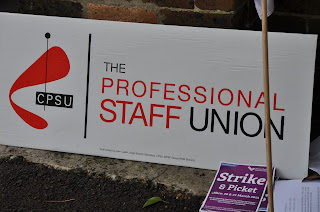 Grant Wheeler, president of the Community & Public Sector Union (CPSU), hoped that the 48 hour action would ‘get the university to listen to our objections to their move to a future of insecure employment.’ Mr Wheeler, who has worked in the library at Sydney University for twenty years, said he was concerned that ‘institutional knowledge was not being built.’

According to Mr Wheeler, the first enterprise bargaining process revealed that the extensive cost cutting was to be increased and if Sydney University was successful this was a measure that would be rolled out across the entire university sector of Australia.

‘They are turning this place into a degree factory, and the appointment of Belinda Hutchinson, the current Chair of QBE, as Chancellor points to their multi-national corporate approach. Management need to work in co-operation with all the staff, and we are trying to make them listen today.’

When asked about the impact the staff action had on overseas students studying at the University, Mr Wheeler acknowledged the pressures these students faced with regards to short visa allowances and high living & studying costs. ‘Of course we understand their feelings – the CPSU represents everybody, and the action here today was not taken lightly – our core mission is to progress education.’ 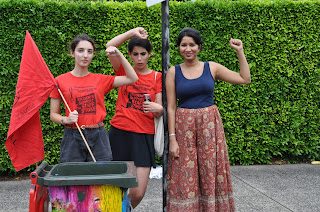 Tenaya Alattas (centre), education officer from the Student Representative Council (SRC), explained that the SRC had been preparing for the March strikes since February this year after the president of the National Tertiary Education Union (NTEU), Michael Thomson, approached them with the idea to convene an education action group. 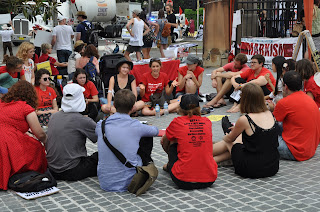 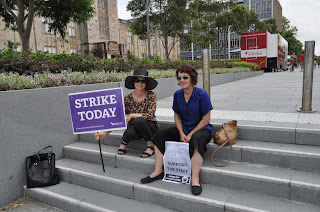 Lecturers in Gender & Cultural Studies, Natalya Lusty (left) and Jennifer Germon (right) had cancelled their classes for the strike action. Noting the visible presence of police on campus, Ms Lusty commented that when protesting students at Berkley had been arrested it led to ‘a culture change and then all the major academics fled.’ Ms Germon felt that ‘the asset stripping of hard won workers’ rights’ would continue to inflict damage across the reputation of Sydney Unversity.

Both had read, and recommended the following ‘open letter’ by way of explanation for their stance...

Andrew Potter, spokesman for the University of Sydney management explained that 'the university does not support the action and regrets that it is happening.'

The university was well aware of the planned action because the unions were required to apply formally by submitting a 'notice of intention.' 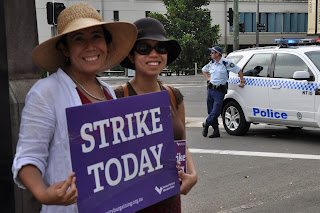 Mr Potter said that the university ‘always intended to be open for business as usual, and that staff had been asked to self-identify whether they would be participating in the action, conducting lectures or working from home.’

According to university records fewer than 600 of the 7,000 staff have participated in strike action, and less than 100 were on strike yesterday. 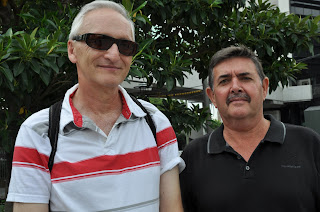 Two academic staff members participating in the strike action were Mark Gillespie (right), senior lecturer at the University’s Centre for English Teaching, and his colleague, Asher Skowronek (left), also a lecturer at the Centre for English Teaching. Both witnessed the tussle near the Chemistry Building between strike action supporters and police.

‘I supported the students’ said Mr Gillespie, ‘and tried to go to their aid as some of them were randomely arrested.'

Mr Skowronek claimed he was pushed from steps by police, and expressed that there was ‘no justification for the heavy-handed over-reaction with these young ones – if the police had really wanted to clear the scene, they could have easily done so peacefully.’ 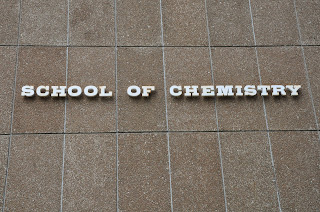 When asked whether the University's position 'being open for business as usual’ may have redirected angst from the negotiation table to the picket line and contributed to the Chemistry Building incident yesterday, Mr Potter strongly rejected the suggestion, and remarked that the university was never going to stand by and do nothing just because picket lines had been installed. 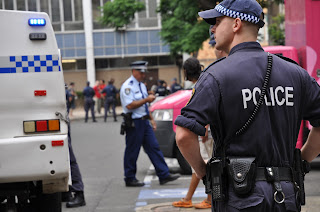 For his part when asked about the storming of lecture theatres by strike supporters resulting in police involvement, Mr Wheeler maintained that ‘picket lines should be about education and not intimidation' and that 'the intention is not to force people not to cross picket lines but to persuade people not to cross them.' Having said that he did admit that 'students will be students.’

However Mr Potter pointed out that ‘the group which had burst into the Chemistry Building during a lecture yesterday were not on the picket line’ and that of the 5 people who were eventually arrested, ‘2 were students and 3 were nothing to do with the university though known to police.’ 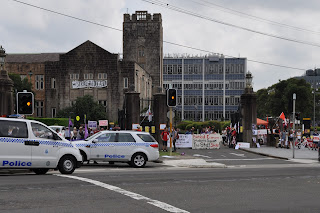 Mr Potter rejected union claims that the university is actively seeking erosion of tenure and casualisation of workforce, and said the claims were ‘incorrect’. 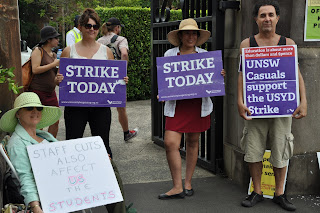 ...and the suggestion that the University intended on doing away with the right for Unions to be on Campus '...is completely wrong.’

Mr Potter explained that the University’s position on this matter is a 'question of rent' and that to date the unions have had free office space, free use of university facilities as well as their salaries being subsidised by the University. The University wanted to see changes implemented that 'would be in line with everybody else who uses the university.' 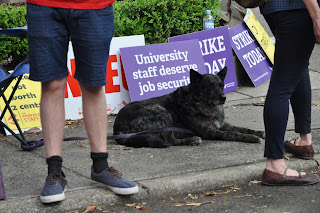 Meanwhile back at the action on the picket line, some were taking a very chilled out approach.