Why I am giving up cycling in the Upper Hunter Shire 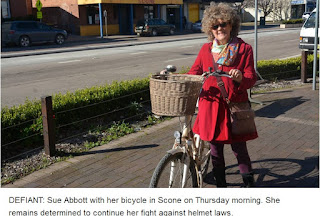 Today in my local paper, "The Scone Advocate," a letter was published entitled "HOW CAN 'LAW BREAKER' BE ROLE MODEL FOR CYCLISTS?" In a somewhat rather non-21st Century way the Scone Advocate does not publish its letters online therefore I cannot give you the url so I've copied the content and popped it underneath my response which is below in between the two lots of dotted lines (my response that is). Oh and also the urls provided in the letter writer's letter were sourced and added by me in case you wanted to read some context to this flurry of letter writing ... sigh

--------------------------------------------
In response to the letter in the Scone Advocate Thursday February 2017 (How can ‘Law Breaker’ be role model for cyclists?’), I would like to thank J McLaughlin for their letter. I understand the premise of their complaint, and completely agree that it must be confusing when viewing the Upper Hunter Shire Council’s (UHSC) excellent bicycle initiative if viewed alongside my personal campaign (which I might add is not condoned by the UHSC) to remove the Australian compulsion to wear mandatory bicycle helmets.
Therefore in a bid not to compromise the sound community programmes that the UHSC has to offer the shire community I will here on in undertake not to ride my bicycle in Scone or anywhere in the Upper Hunter Shire for the next four years whilst I am serving my time as an elected local government representative.


Naturally outside Australia where there is a large world full of many countries without mandatory bicycle helmet law, I will ride with the rest of my global citizens as I see fit.
Consequently that now means there is a bicycle (the one pictured in the Scone Advocate alongside J McLaughlin’s letter) now idling at my place so if anyone would like to buy a white giant suede, 9 yrs old, one elderly lady rider, it is now for sale for the princely sum of $5,000.00. If sold I will donate all proceeds to the Scone Neighbourhood Resource Centre which is desperately in need of a new home.
If truth be told it has actually become a trifle dangerous cycling in this shire without a helmet what with insults, stones and egg sandwiches occasionally thrown at me whilst on my bicycle.
Once again I would like to take this opportunity to thank J McLaughlin for their salutary reminder that law breakers and role models cannot mix.
Sue Abbott, Scone
--------------------------------------------
Letters to the Editor
HOW CAN "LAW BREAKER" BE ROLE MODEL FOR CYCLISTS?"
I read with interest the article in The Scone Advocate ... Shire Notes: an enlightened new adventure ... Sunday February 12, 2017.
"New bike facility at the Scone Visitor Information and Horse Centre". Very commendable.
But what concerns me greatly is that the article seems also to (self) promote Cr Sue Abbott.
This person has shown a blatant disregard for the Bicycle Laws and bike safety.
This person has been fined many many times for refusing to wear a helmet.
From the Daily Telegraph ... August 15th 2016:
"In a seven year battle against bike helmets Sue Abbott has had her driver's licence suspended, bikes confiscated and four criminal convictions recorded".
How can this person be promoted as a role model for cyclists?
Is the Upper Hunter Shire Council endorsing her actions?
Magistrate Barko dismissed Abbott's linking of helmet laws to climate change as an argument with "no rational reasoning".
Not my words ... the words of a Magistrate ... the woman is irrational.
I reiterate, I think the idea of bike hire (and helmets) is very commendable.
But I also feel the Shire Council is treading on thin ice, both morally and legally, if it continues to use this "law breaker" to promote it.
J McLaughlin, Merriwa
Share |
Posted by Freedom Cyclist at 5:32 PM